Sweetness, Sweetness I Was Only Joking... 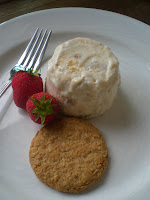 Last week in the weekly Organic bag, we were delivered a bag of apricots. Apricots are one of those fruits that, as a fussy child, I hated due to their spotty velvety skin. Of course now that I will consume most things, I love them. So a few Organic beauties in the bag were the cause of some excitement. How disappointed we were.

Anybody that has bitten into an apricot that has not ripened will know that horrible sense of disappointment. It is like biting into a cotton t-shirt (if you have ever had the strange tendency to do that sort of thing) - all fibrous and tasteless. The problem with apricots is it is a difficult one telling when they have ripened to sweet juicy perfection. They look ripe, they feel ripe, but they ain't always ripe. Another problem they have is that, unlike most other fruit, they will not develop or ripen once plucked from the tree. Once plucked you are, well, you get what you are given put it that way.

Not one to get down about this kind of thing, I often turn a bland tasteless bag of 'plucked too soon' apricots into a jam. But my daughter had spotted them and they needed to be developed into something edible reasonably quickly without dousing them in a bag of sugar. A great healthy way of using any fruit, ripe or not ripe, is to make a little fruity yoghurt ice.

Whenever I make a yoghurt ice I make it as if I was blending a smoothie, as my smoothies often become healthy ice lollies anyway. So into a blender goes a tub of yoghurt, perhaps a little honey and your choice of fruit stewed in a little sugar or honey. With the apricots, they certainly needed sweetening in a pan with honey, but I also spiced them slightly with a stick of vanilla and a pinch of cinnamon. I also folded in a couple of crushed oaty biscuits and an egg white. 2 hour's freezing in a pudding mould and a reasonably classy but delicious healthy dessert was born. Goodbye powdery bland apricot, hello succulent fruity yoghurt ice.

1 - In a pan, add the apricots, honey, cinnamon and vanilla. Bring to the boil and simmer for 5 minutes to infuse with the spices. Remove from the heat and cool.
2 - In a blender, add the yoghurt and stewed fruit and pulse until well blended. Pour into a large bowl.
3 - Fold in the crushed biscuit, then the egg white.
4 - Pour into ramekins or small pudding moulds and set in the freezer for 2 hours.
5 - Soften the moulds in hot water then tap onto plates. Serve with a biscuit and some berries.
at July 24, 2007

When the apricots taste like cotton wool, I always make jam - this is a welcome change - thanks David!

Can I just say that I was completely shocked to just log on to your site to see that we have both just posted about apricots! I didn't log on to yours yesterday!!! Talk about great minds thinking alike!

I thought you'd planned it!

I love apricots - fresh ones, dried ones and jam. We know apricot 'Brussels' was once grown in our garden as there is still a lead plant tag nailed to the wall. But it was probably in a greenhouse which has long since been demolished.

Those pesky apricot flavoured t.shirts! This sounds really good. I can never remember from what age children can eat raw egg but I'm guessing that I'd be alright now as youngest is nearly 3.

You may disagree, but I never worry when it comes to raw egg white, especially if it comes from a good source. My daughter is 2 and a half and she has eaten this and other dishes with egg white in for the past few months. Now, I await the food police!

I haven't seen any food police for a long time - I think you're alright! I have let them eat raw cake mix as my brain tells me that's different and I always did it! We use organic free range eggs and I normally check them in water first to make sure they're okay - no floaters. I only do this since I cracked an 'in date' egg and it was rancid.