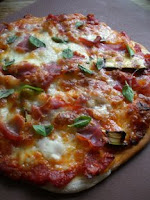 A long time back, my brother and young nephew were visiting for the weekend. Thinking I was doing the right thing, and before the days when I had the confidence to cook such things, I bought some of those pizza bases you see in the frozen food section of the supermarket. My idea was to make a few home made pizzas for the benefit of the little fella. Once crunch of the Olympic discus-like pizza, and my nephew was one tooth down. Oops.

That was the catalyst for me to start getting into bread making so that I could attempt to make tooth friendly pizzas for my family. Thankfully I found it easy and my daughter has so far retained her molars. Anybody who thinks that making bread dough is difficult should persevere. There is no substitute for a beautifully baked fresh piece of dough which can be shaped into our number one takeaway. And everybody loves a pizza. 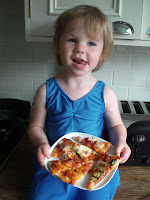 Another advantage to making your own pizzas is the whole family can get involved, and you can make them reasonably healthy as you are in control of the ingredients. My daughter has a good 'squidge' whenever I make some, and we also have a bit of fun with the toppings. Making it good fun generally means that she will eat whatever we put on there, not that she needs much encouragement. I've called them The Pizza Olympics.

So last week I made 3 pizzas for The Pizza Olympics, letting Cerys randomly choose some well thought out ingredients to assemble onto the pizza bases. Each one was a face of some kind, made with various combinations of cured meats and sausages, char grilled vegetables and a spiced up tomato, 3 cheese and wild herb effort. Thumbs up or thumbs down and a large cheer were the judges, and although each received a messy thumbs up and a loud cheer, the loudest cheer was reserved for the char grilled vegetable pizza. And not a tooth fairy was required.

1 - To make the dough, sieve the flour and salt into a large bowl. Make a well in the centre, then tip in the yeast, olive oil and honey. Slowly pour in the tepid water and with a clean hand, circle the flour and combine thoroughly to make dough that isn't too sticky and not too dry. Turn out onto a floured surface and knead for 10 or so minutes until you feel it 'gives'. A good 'give' test is to push a flat palm into the dough, and if it springs back it will be ready. Put it back into the bowl, cover with cling film or a tea towel, put somewhere warmish and leave for approximately 2 hours.
2 - In the meantime, make the tomato sauce. Warm the oil in a pan and add the garlic and chilli. Fry for 1 minute, then add the tomatoes and red wine vinegar. Bring to the boil then simmer for 30 minutes until reduced.
3 - To char grill the vegetables you will need a ridged pan. If you don't have one, a frying pan will do but the ridge effect will look better. Heat up and brush the ridges with olive oil. Put the strips of vegetables in the pan and cook for 2-3 minutes each side so that they caramelise and lose some of their water. Remove and set aside.
4 - Pre-heat the oven to the hottest setting and put in a suitably sized baking tray. Remove the dough from the bowl; it should have at least doubled in size. Push the air out and knead for 1 minute or two. Then tear off one third and roll out to your desired thickness on a floured surface.
5 - Take out the baking tray and place the pizza base on top. Working quickly, cover the base with tomato sauce. Then scatter the base with the vegetables, torn basil
and ripped mozzarella. Place immediately onto the top shelf and bake for 8-10 minutes, until golden delicious. Remove, leave to cool slightly so that you don't burn your palate then devour. Don't forget the thumbs up and loud cheer.
at August 21, 2007

Nice going there, David. The little one looks adorable.

Your pizza looks delicious :)
I made one some time ago but it wasn't looking so good...

Have promised my partner that I will try my hand at pizza soon. Perhaps this post is the kick up the bum I needed. :)

David your daughter is a cutie and looks like she loves pizza just about as much as I do. I find it a really quick way to do the dough in the bread machine!! Perfect everytime. Then like you put on my own healthy ingredients. But problem is I don't know when to stop!!!

What a little sweetie pie. The pizza looks delicious too.

Cynthia - how kind of you. I can assure you that the angelic looks mask a typically mischievous one inside!

Margot, keep trying, you will get there in the end as your cooking is amazing.

Wendy, consider it that kick up the bum you needed and make a pizza!

Pat, ditto Cyntia. We all love pizza but obviously it is a treat, we don't eat it all of the time. I don;t have a bread machine but my dear old mam swears by them now.