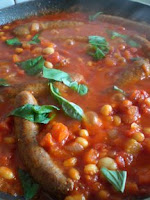 After a week of caravanning, kitchen utilities have been at a minimum and I have had to make use of a couple of electric hobs and a handful of utensils. It is amazing what you can do on a portable electrical hob. But with a lot of walking and adventuring to be done, I have put any cooking that takes more than 20 minutes well and truly out of my mind. So think big pots and ingredients that warm you from the soul outwards (it is has been like winter up here this week), as well as keep hungry tummies full.

When I camped or caravanned as a child, tins of beans were a common thing. They are almost ubiquitous with the camping experience, as are the tins of beans that have those little grey sausages in. Not something that I consume these days, but I still do hanker now and again for those salty tins of sausage and beans for a quick fix. So I decided to invent my own.

I guessed that if I had a tin of haricot beans and a tin of tomatoes, as well as a pack of quality sausages, I could make a very simple version of sausage and beans and pack it full of goodness and flavour, rather than blandness and salt. And that is what I did. I make no apologies for putting up a recipe for 'posh' sausages and beans. The French 'peasant' dishes such as La Potee and Cassoulet are essentially meat and beans casseroles, made using cheap ingredients and enhanced using amazing flavours. Ironically, they can often be seen on the menus of 'posh' restaurants.

Another advantage for mums and dads with fussy kids is you can experiment with the vegetables in this one. For some reason, kids love sausage and beans, so hide a few within the sauce. Enjoy my version. Camping and caravanning may never be the same again.

1 - In a large frying pan, heat up the oil then add the sausages. Fry quickly, turning regularly until browned all over. Remove and set aside.
2 - Add the onion, bacon, carrot and leek and cook for 5 minutes until slightly softened and coloured. Add the garlic, chilli, paprika and fennel seeds and cook for a further 2 minutes.
3 - Now add the beans, tomatoes and sun-dried tomatoes and bring to the boil. Add the sausages, lower the heat and cook for a further 10-15 minutes until slightly reduced and the sausages are cooked through. Taste for seasoning. Its should not need salt due to the bacon but will need a good grinding of pepper depending on what sausages you have used.
4 - Serve in large bowls with crusty bread and a good handful of torn basil.
at August 15, 2007

Fab ... I particularly like the idea of putting fennel seeds in as a flavouring. Why are we so ashamed of our own, English and British versions of peasant food, but so proud to eat foreign versions? Odd.

I've tagged you for a fantastic four meme ...

Well, I'm not ashamed of our own 'peasant' foods. I'm in the belief that the best food on the planet all comes from that need for survival. As much as I adore the French and their food, the best French dishes are essentially the dishes from poor areas, and I'm sure they would want to know what all of the fuss is about. Food should not be complicated and pretentious. It should be what it is intended for - to fill you up, to taste great and to make you very very happy. A foam, a jus and a gel isn't going to do any of them is it?!

We had beans on toast every Friday night of my childhood. It was grocery shopping night and mom looked for something quick and easy. The basic of foods are sometimes the best for their simplicty and well-rounded flavours. You don't have to spend days in the kitchen cooking gourmet to impress.

Well done! I like that recipe. Sounds quick and easy and alot healthier than the processed version.

That looks soooo good, I could eat it right now.