Its Stotting Down Here Man 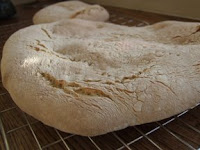 An interesting discussion has taken place this week on the BBC food boards. I don't know if you visit these boards, but every now and again I pop over to see what people are talking about. Most of the time it is people asking for a bit of foody advice. Often it is people getting irate about some of our TV chefs. And sometimes it is people having a passionate chat about fantastic produce. And that is when I have my two penneth, because I can't resist a bit of banter about a good old British classic. And this week, it's a Geordie classic - stotty cake.

Where ever I have lived, two things are mentioned to me as quintessentially North East England things; one is pease pudding, and the other is stotty cake. I've a feeling that many a place can lay claim to pease pudding, but we Geordies invented the stotty cake, no argument. Stotty cake is simply a flat bread. Not flat in the sense of the fantastic Persian flatbreads, but flat as in flatter than the average loaf. There is nothing unusual in there, just flour, yeast, sugar, salt and water. Mine has a little lard or margarine in. And that is simply because it is the way my Nana used to make them.

Stotty cakes are apparently so called because the bakers who made them in the olden days used to 'stot' (Geordie term for 'throw') them off the floor to check that they had the right texture and to naturally get them into their distinctive flat and round shape. I sincerely hope that the bakers of today don't use that technique, but what a story. They were also made using dough off-cuts and cooked slowly in the bottom of the oven whilst the rest of the oven was used for 'normal' breads. Hence the reason they are often referred to as oven bottom cakes. Either way, they are delicious.

Mine use my tried and trusted '1' method. That is 1 of each quantity, and it always works. Heat your oven to the top temperature and after the first rising, push it into a disc shape, stick your finger in the middle to make the distinctive centre hole (no idea why, but it's a tradition man!) and stick it in the bottom of the oven. 15 minutes later, the house will smell divine and you will struggle to wait for the scalding hot bread to cool down before devouring it. We like to eat ours with good ham, pease pudding, lots of butter and English mustard. It is the ideal sandwich bread due to its shape and size.

The best thing about discussions around classic foods such as the stotty cake is that everybody has an opinion, and what's wrong with that? The older the piece of food, the more far fetched the story around it, and that makes it even more interesting. As long as people aren't having wars about it, then a good bit of heated discussion on the matter isn't going to harm anybody. So get stotting. And divvent dunshus, wa Geordies man!

1 - Pour the flour and salt into a large mixing bowl. Rub in the lard or margarine until well combined. Then stir in the yeast and sugar.
2 - Make a well in the centre of the flour, then gradually pour in the water, stirring in circles with one hand until combined. You may need more or less water. If it is too sticky, add more flour, too dry, add more water.
3 - Knead for a good 10 minutes. A good test that I use when kneading bread is to firmly push my hand into the dough. If it doesn't spring right back, keep kneading.
4 - Once ready, dust with flour, cover and leave in a warm place for at least 1 hour. It should have doubled in size. Pre-heat the oven to 240 degrees C, GM9 and place a metal baking sheet on the bottom of the oven.
5 - Gently kneed the dough and push out any air. Rip in half then on a floured surface, push the dough into a rough disc, approximately 1 inch thick. Stick a hole in the middle with a finger, prick randomly with a fork then place onto the baking sheet. Bake for approximately 15-20 minutes, until the bread sounds hollow when tapped and golden brown.
at November 29, 2007

Hya. Just popped over from the BBC food meassage board via your kind link. I came for the Stotty Cake recipe but like the look of this so much I may be a regular visitor. Thank you for taking the trouble to help out!! Have you got the pease pudding recipe as well, and the singing hinnies? I don't ask for much do I? I think the SH are akin to Welshcakes and I make them quite regularly as I married into the Welsh! This is a long shot but I remember my old Aunty making frothy custard. She says I must have dreamt it. What say you? All the best.WPQ

Great post, David. I always love to get a little history on a loaf and this one has plenty. Looks great!

Please let me add my thanks Aimee in saying, thanks for the little history on the loaf.

WPQ - the singing hinnies, pease pudding and many other Geordie classics will be going on in the next few weeks - you have revived a burning passion for me to spread the love of these fantastic foods!

Aimée and Cynthia - nothing like a bit of history whilst chewing on the product is there? Enjoy.

I'm sure I won't be the only one, but I have nominated you for the 2007 Food Blog Awards ...new blog category, although it feels as if you've been blogging since forever ;) details on my blog if you don't know about this

Very interesting post! I have never heard of Stotty Cake before and thanks David for enlightening me. It's great to hear of traditional region recipes.

Oh thanks for the History of the Stotty Cake - great stuff! Is a Stotty cake the same as an Oven Bottom? One of my neighbours has gone up North this weekend and the highlight will be Oven Bottom's from Bury!

Great post!
I've never heard of stotty cake before. Love the sound of it but want to try it in NE England before trying the recipe myself!

Thanks for the comment on my site. I have yet to bake a stotty, but I will give it a go. I too would like an accompanying dish of pease pudding, so look forward to seeing your recipe.

David,
Oh I have a dumb question.

What exactly is "good strong" flour?

(wince) I told you it was a dumb question! but I'd love to hear exactly what the qualifies as good and strong.

Stotty cake is totally new to me. My husband and I honeymooned in England 12 years ago, where I became familiar with English dishes, such as jacket potatoes, fish and chips, and ploughman's lunches--no cakes though. I think I'll have suggest another trip to him and call it "doing research for my blog."

No question is a sumb question! When I make bread, I always try to make it using strong bread flour. The difference between that and normal plain flour is the gluten content - it has more gluten thanks to the wheat usually grown in hot and dry conditions. Higher gluten content usually means an even and better rise and a lighter bread. Honest! But don't use it as a rule. I've made great bread using so called 'normal' plain flour. But do try and and compare. Hope this helps!

Susan - see you tried all the classics on your travels! If you come back you will have to travel up the frozen north East of England to get a stotty cake. Worth the journey though!

Ah, thanks David. I love coming here to get my little Geordie language fix. I sometimes use the word 'stot' and get a few raised eyebrows in response. I recently made pease pudding so looking forward to see how you do it. It was good but not as good as being in the NE and eating it smeared on a stotty and topped with a thick slice of ham.

Thanks for the story about the stotty cake. I will have to ask mom and dad about this one as I have not heard of it before. But...hey ...I was born in Canada and not in Lincolnshire like my parents.I love anything that comes fresh from the oven with a lovely aroma as this loaf would have!!!

So funny--I found this because it is stotting it down here in Boston right now, and I just used the phrase (and then tried to explain it to my American workmates). Just seeing the phrase brought back memories of stotties full of ham salad. And of course the pronunciation: "Sto'y keeak!"

The best Stotties you'll ever get.