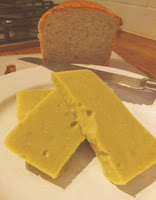 I have mentioned this before, but in my travels over the years, there are two things that people have pronounced to me in terrible efforts for Geordie accents; stotty cake and pease pudding. Despite the fact that not a lot of people outside of the North East know what they actually are or how they are made, they are still known but usually in mythical terms. It was always generally followed with, 'What are they Dave, do they really exist?'.

My earlier post on the stotty cake hopefully explained this wonderful Geordie bread to anybody who wasn't sure what it was. Now it is the time of the pease pudding, as no stotty cake is complete without a slab of pease pudding and ham beneath its fluffy interior.

Pease pudding is literally split peas cooked down so that they form a paste or 'pudding' of some form, which can then be cut into slices and spread onto bread or simply put on a plate alongside cold meats and pickles. We love the stuff, and a sandwich made with ham and pease pudding with lots of English mustard has to be one of life's great pleasures. I'm easily pleased of course.

I have my own method of cooking pease pudding, and I know that some people will 'tut tut' it. There are so many variations, but I use the one that works for me. The easiest way is probably to just hang a muslin cloth full of yellow split peas into the water whilst boiling a ham. But I like large volumes and prefer to simmer the peas in with a ham hock, much like making a pea soup. The ham flavours and seasons the peas beautifully and then the hock can be picked into large gelatinous slabs to serve in a sandwich with the pudding. Is your mouth watering yet?

As a youngster, there was always a tin of the stuff at the back of my mam's fridge that never seemed to get opened. It may still be there. I think it was there as emergency supply in case there was a pease pudding drought, as it always seemed to be on the young Hall household menu. I never got sick of it.

It may not look the prettiest of things, and it may take folk unaccustomed with pease pudding a while to get used to the texture. Cold and smooth, it certainly surprises when bitten into for the first time. But like many of the cheapest and best little treats the U.K. has to offer, persevere and you will benefit. It is marvellous stuff. And we will be having a large slab on the plate this Boxing Day alongside the pickles, cheese and good bread to assist the mountain of cold leftover turkey. And I'm shaking with excitement at the thought.

Pease Pudding
Makes lots, it can be frozen in batches

1 ham hock
500g dried yellow split peas, or a mixture of green and yellow like I have done, soaked for 8 hours then washed and drained
1 whole onion, peeled
1 bulb of garlic with the top cut so that it is slightly exposed
Ground white pepper

1 - In a large pan add the ham hock, peas, onion and garlic. Pour in water until the hock is just slightly covered.
2 - Bring to the boil, then turn down to a simmer. Cook for 2 and a half to 3 hours, skimming off any scum that forms on the top and stirring from time to time to ensure it is not sticking.
3 - Remove the ham hock and allow to cool. Remove the onion and garlic from the peas and then pour into an airtight container. Stir in a little ground white pepper to spice it. Allow to cool.
4 - When cool, the peas should form into a slab which can then be portioned off for the freezer, or simply shared out to hungry people along with lots of bread, ham and mustard.
at December 19, 2007

Mom & Dad make "sloppy peas" which they relish at home and are over the moon for if they find them at a Canadian fish and chip shop!!I had thought that was pease pudding, so thanks for clarifying David!!!

Hi David. Not been on much lately. Great to see the pease pud recipe at last. I think the last poster was looking at 'mushy peas' also well loved! Cute Angel! My grandsons were:one of the drummers drumming, (age 10)one of the lords a leaping,(age 8) a spanish dancer (5 and a half) (Christmas round the world) all boys and two stars
(2 and a half year olds - boy and girl - not twins but children of two of my sons born within 10 days of each other!) Wonderful. Having trouble with a 'proper' bubble and squeak. Can you help? Wishing you all the best for 2008. Have also started writing little family stories and anecdotes from my time as a primary teacher. Many involving nativities!! WPQx