William, It Was Really Nothing 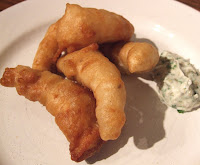 I bought the Sweet William as I thought I knew what it was. And you know what happened to 'thought'. For some reason, despite the fact that I had never eaten it or cooked with it, I assumed that I knew what to do with it. As it was bought already skinned and beheaded, all I could see were a couple of long thin fish carcass with meaty flesh waiting to be snaffled. Filleting it, things got weird. Instead of bones and a 'normal' spine, it had a thick membrane, much like a monkfish has. That was when I knew I had to Google as it wasn't what I had assumed.

Nothing was revealed except for some talk on the Australian Gummy Shark. As none of these have been floating up the Tyne in recent history, I had to delve a bit further with a call to my fishmonger. And that was when the Dog Fish was revealed. Sweet William is the affectionate name given to our not so lovely Dog Fish. Whether it has been so named in an attempt to get people to eat it I don't know. But my decision in the end was to make a simple batter and a 'cheat's' tartare sauce and eat them as goujons with some sautéed potatoes.

If you have never eaten Dog Fish before, you will be in for a nice surprise if you decide to try some. If you can get past the hideous features, a delectable meaty flesh is revealed. Sweet by name and by nature, the dog fish makes for a sensational quick fried supper, one that won't hit you too hard in the purse. It is so cheap and of course, like a lot of our sustainable local fish, completely neglected and under-used. So please give our humble Dog Fish a chance; a Dog Fish is for life, not just for Christmas....

For the Tartare Sauce
Good shop bought mayonnaise
Fresh dill or parsley, chopped
A handful of capers, chopped
A squeeze of lemon juice
Salt and pepper

1 - Heat up the oil in a pan until hot enough for batter to instantly float to the surface when dropped in.
2 - To make the batter, pour the flour, seasoning and English mustard powder into a bowl and make a well. Begin to pour in the cold beer and with a whisk, beat thoroughly until you have a batter the consistency of double cream.
3 - For the 'cheat's' tartare sauce, mix all of the ingredients together, taste for seasoning and keep aside.
4 - In batches, dip the fish into the batter and carefully lower into the hot oil. They should curl up and float to the surface. Cook for 2-3 minutes until golden brown.
5 - Place onto kitchen towel to soak up any excess oil, then serve with the tartare sauce.
at December 04, 2007

And I thought it was going to be about me...
Still, I suppose the lovely recipe makes up for it. Just about...

David, LOVE this post - all that googling because it wasn't what you thought (we've all been there!) .. dogfish I've met in the chippie, but never bought it or cooked it. I'll try, next time I'm at the really good fishmonger in Reading

Thanks for inspiration
Joanna

Yes Will, I was going to put some pun in there about you but I knew it would have made you cry so refrained.

Joanna, it serves me right for being so cocksure! It was delicious though.

Fascinating! So was the texture at all like monkfish once it was cooked? I've heard of dog fish, but I think it's mostly found in the South here in the States. Britain's got much prettier names for fish in general.

Hya. That's a good recipe that even I might try!. I love the way googling throws up all sorts of things and takes you places you never thought of - not all of them where you'd want to be!! I live near Beer in Dorset (I live in Somerset on the Dorset/Devon border!)and when we go down there I always get some fresh fish. Will look out for Sweet William next time I'm down there. WPQ

Excellent post David!! Dog Fish here though is quite different and takes lots of soaking in water for some reason. Dog Fish is a type of shark that we have on the west coast of British Columbia and a bottom feeder. At the fish & chip place what we see is usually Halibut or Cod. Interesting how things are named in different countries.I will definitely go for your batter and tartar sauce!!!!

Hya. Hope you approve - I posted a link to here on the BBC messageboard for someone wanting a fish batter.

Thanks for the engaging lesson on "Sweet William." I've never seen it in the States. Your explanation of the names "dog fish" and "Sweet William" made me chuckle. I wonder why people don't seemed bothered by "catfish" but find "dog fish" unpalatable?

I would try your dog fish, but if it's as ugly as you say, I think I'll have the fishmonger fillet it for me. Happy Holidays, btw :)

OK, Sweet William is by far the better name. Dog fish? I guess that's why one doesn't see it on a menu often...or ever.
Way to go! You certainly mastered it

Thanks for posting the link, I did get your message but only 2 days late for some reason?! Think this messaging service on Blogger is a bit temperamental. Keep an eye out for the dog, worth it.