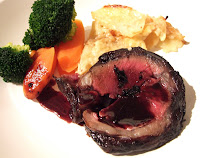 A lot of food available in modern age Great Britain tends to have the tag, 'I don't eat it because I don't know what to do with it'. Any fish that isn't a cod or a haddock has that tag. Vegetables such as celeriac or fennel have that tag. And game certainly has that tag.

In the United Kingdom, we have arguably the best game in the world, with special reference to Scotland. The climate and landscape is ideal for the likes of deer to roam and graze making Scotland the envy of much of Europe. At this time of the year, game is in abundance yet we still don't seem to know what to do with it and turn to the chicken, beef and lamb again.

Half of the problem with game, especially venison, is that if not cooked properly it can be as dry as leather. And that puts people off, making us think that you need some special skills to cook it. But it should not be feared. Just lower the cooking time, regularly baste and ensure it is rested.

If you give yourself a break from the common meats of today and give game a chance, you may just change your life. Low in fat and cholesterol, low in cost, meaty and tasty, sustainable and naturally free range (in most instances, always buy from a reputable source), it should be the natural choice for us Brits. Try this simple recipe for a saddle of roe if you don't believe me. The marinade may seem like a long list but they are all essential store cupboard ingredients. It can be experimented with and it makes the most sensational sauce when reduced. Dead easy!

1 - 24 hours in advance, put all of the marinade ingredients into a pan, bring to the boil and simmer for 15 minutes. This will take out the alcohol which can draw out moisture from the meat, as well as ensure maximum flavour. Cool down then place the saddle of roe in. Place in the fridge and leave for a day or so, turning every now and again.
2 - When ready to eat, remove the saddle and strain the marinade into a small pan.
3 - Pre-heat the oven to GM8, 220 degrees C. Season the roe.
4 - Heat up the oil in an ovenproof frying pan. Quickly seal the meat all over. Throw in the butter then quickly baste the meat, then place on a high shelf in the oven. For a piece of meat this small, cook for 12-15 minutes rare, 20 minutes medium. Do not cook well done or it will be like leather.
5 - Remove the meat, cover with foil and rest for 10 minutes.
6 - Reduce the marinade until thickened. Add the jelly and melt. Finally stir in a knob of butter. Taste for seasoning.
7 - Serve sliced into thick steaks with my pan haggerty and some greens.
at January 06, 2008

I'm cooking venison stew tonight. It's smelling lovely! Experience has taught me to buy a shoulder joint and dice it rather than buy the stewing venison. Find the latter can contain so many different cuts of meat that it's impossible to have an evenly cooked stew.
I've bookmarked your recipe for later this month. Will let you know how it goes. :)

Sounds excellent. I love all game and stocked up today at the local farmers' market. I bought venison, pheasant and wood pigeon. I've not cooked wood pigeon before - any ideas, other than roasting it simply?

Wendy - you are right about the shoulder joint, and easier to tell the quality too. Although you won;t have many problems finding top venison up your neck of the woods!

Antonia, with them 3 birds, it is crying out for a game pie! Find a good recipe and go for it, it will be superb.

David, I hope that a lot of people living in the UK read your blog and you do a great job in educating about ingredients and the ways to cook them. Thanks!

My preferences lean toward strong flavors and especially game. This is perfect time of year for a venison stew or roast. I've helped our farmer friend Brett butcher the deer he shoots before they can destroy his crops. He gave me a pocket knife with instuctions on how to remove the tenderloin from what we call "road kill."

I love game and cooked a venison stew the other day, which fortunately, came out tender. Great post and recipe.