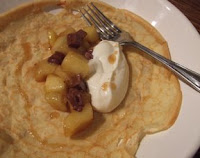 On the news this morning, it was claimed that only a third of us Brits indulge in Pancake Tuesday. The traditions appear to be on the way out and seriously, that is sad. Our friends in France or Spain, for example, would never give up on their quirky traditions; if anything, they look forward to having any celebration as long as it is based on food. And so do I.

As well as the tradition and the inevitable eating, pancake making can also be a lot of fun. My daughter had her first experience of pancake flipping last year, albeit one with both of my hands on the handle too, and rarely have I seen her so excited when we piled in the apple, cinnamon and chocolate filling we prepared together. It took 5 minutes for her to demolish our creation, but 5 minutes of rare silence followed by a resounding, 'Dad, that was soooooo good!' Surely these reasons alone are enough for us to keep these fantastic food traditions alive. Happy Shrove Tuesday everybody.

1 - Sieve the flour into a large bowl. Make a well in the centre, break in the egg and with a whisk or fork, combine. Slowly pour in the milk and water combination, whisking all of the time, until you have a batter the consistency of thin cream. If it looks too thick, add more milk.
2 - Heat up a non-stick frying pan. Pour in a little oil - I use a flavourless one such as groundnut - then wipe with a piece of kitchen towel. When the pan is really hot, pour in a small ladle of batter mixture and quickly turn the pan around until it is covered. Cook for 1 minute then flip and cook the other side. Cook the pancakes in batches and set aside between greaseproof paper.
3 - To make the filling, melt the butter in a non-stick pan. Add the apples and quickly cook, stirring all of the time, until they slightly soften and colour. Stir in the cinnamon and the honey. Cook for a further 2-3 minutes until the honey and butter form a toffee sauce.
4 - To assemble, pile the apple mixture onto pancakes, dot pieces of chocolate amongst it and drizzle on the toffee sauce. A little créme fraiche or yoghurt would be lovely.
at February 05, 2008

I have to say, I didn't have pancakes today. But then I never have on Shrove Tuesday. Suspect it might be more of an English tradition than a British one?
I am, however, inspired by your lovely recipe and am going to make some pancakes at the weekend. :)

I didn't see the news today. That's really sad. You're so right, in other European countries all the traditional festivities are looked forward to and celebrated with gusto.

As you know we had a pancake fest in our house and we always will.

Glad your little one enjoyed it.

I've certainly had my fair share of pancakes today!
What's sad is the amount of people who don't know/want to cook pancakes from scratch. In my opinion there is no excuse to buy ready-made pancakes or that additive-laden "just add milk and shake" stuff as pancakes are one of the easiest things in the world to cook.

We've just spent a good half hour or so in the kitchen, munching our way through a small batch of pancakes.

Mind you, if we'd tried to finish off all our eggs/butter/sugar we'd probably be thoroughly ill by now!

Wiki suggests it's a UK tradition - and certainly growing up in Australia we always had pancakes (and races) to kick off Lent!

Shrove Tuesday pancakes is such a fun tradition. We do them in the Episcopal church here in the U.S., but the tradition slipped my mind this year because I'm between churches and our presidential primary is going on in my state today. I think it's so cool you demonstrated in front of 200 kids, though!

I did have pancakes for Pancake Day. We always had pancakes on Shrove Tuesday when we were growing up. We're not Catholic and don't folow the tradition of Lent...but we've got to have those pancakes TODAY!!

I was travelling for work yesterday and so missed out on my usual Shrove Tuesday pancakes. May have to make some tomorrow night to make up for it. I'm a bit dull in that I just like simple lemon and sugar on mine, but your apple and cinnamon filling looks seriously tempting. It might be time to branch out a little!

I also had my fair share of pancakes too my family would have never forgiven me if I had missed this event in our household.

In the UK Pancake Tuesday is traditionally the day to use up all your flour, eggs, milk & butter before beginning your Lenten fast.

Being mindful of my responsibility to upkeep this most worthy tradition, I emailed No 1 son in Los Angeles to remind him of one of his favourite childhood treats & he actually had to go out shopping to buy flour & butter to make them!

As a lad he always liked them with Lyle's Golden Syrup, but this year went all grown-up with sugar & lemon juice. His Canadian OH went with maple syrup at breakfast time! He said "Oh Nooooooo! That's just all wrong!"

I really enjoyed my three with lemon & sugar & the rest are frozen to enjoy later with a creamy mushroom filling sprinkled with cheese & grilled. I just don't know why we only make them once a year!

Wear the Brit food banner proud. The desserts are supreme,stews, roasts and casseroles are up there with the best.

Delicious! I mentioned it on my pancake recipe, hope you don't mind.