It Was Acceptable In The 80s 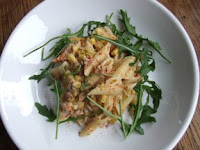 One of the first things I attempted to cook when I was a young lad was tuna and sweetcorn pasta. It is a very 1980's thing; a tin of tuna, a tin of sweetcorn, a huge dollop of jar mayonnaise and your pasta of choice. Hardly challenging, but staple food for the school Tupperware bowl. Alongside egg and tomato sandwiches, they were the two 1980's foods I could knock together in my sleep.

Moving forwards 25 years, tuna and sweetcorn still appears on the Hall menu. It is perfect fast food when the cupboards are bare, and I for one am not going to get snobbish about the fact that it involves opening up a couple of tins and stirring it into some pasta. Sometimes life calls for such emergencies. I'm sure Delia would approve in her new series, How To Cheat At Cooking.

So I thought I would try to turn this ever-lasting classic pasta 'sauce' into a slightly classier number, if that was possible. In the 10 minutes it takes for the pasta to boil, I was pretty sure I could knock together a 'posh' tuna and sweetcorn pasta dish using what little I had left in the cupboards.

So a leek to give it some mild onion flavour, a pinch of chilli and some sun-dried tomatoes to lift the blandness, and a squeeze of lemon juice to sharpen would do the trick. And that magical ingredient, low fat crème fraiche, makes an instant coating for your pasta of choice. No escaping the Jolly Green Giant or the tin of tuna, and hey presto, a retro pasta dish is on your plate in 10 minutes minus any sniggering from food snobs. Simple, nutritious fast food with lots of flavour and a bit of nostalgia.

1 - Bring a pan of water to the boil and add your pasta of choice.
2 - Whilst the pasta is cooking, heat up the olive oil in a large pan and add the leek. Cook for 5 minutes on a gentle heat until soft.
3 - Stir in the chilli flakes. Add the crème fraiche and heat up, ensuring it does not boil or it will split. Stir in the cheese and combine thoroughly.
4 - Finally, add the tuna, sweetcorn and sun-dried tomatoes and heat through. Add a squeeze of lemon juice and taste for seasoning.
5 - Stir into your cooked pasta and serve in bowls with some greens such as rocket or watercress and a pinch of paprika.
at February 13, 2008

Should be eaten while watching 'Ashes to Ashes', I reckon...!

Yes, well worth updating David ... the dead hand of fashion has a lot to answer for ;)

This is one my favourite "go to" recipes David. You are so right. Just change the shape of the pasta, maybe throw in some pesto..we always have the ingredients on hand. Perfecto!!

It is a lunchbox staple in my house too! Tasty, satisfying and quick - what more could you want. I'm currently having a bit of a love affair with capers and they seem to be making their way into my tuna salads of late. I'll try the creme fraiche trick next time though - be better for me than the usual dollop of mayo!

I like your posh version :) I usually use spring onions...

Enjoy the rest of weekend, Margot