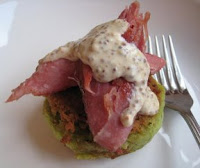 This coming Sunday is a special day up here in the North East. So special, that it will pass by almost unnoticed and uncelebrated. For it is Carling Sunday, another day of complete irrelevance to most concerned yet one that should still be an important day on the calendar of local food customs.

On this 5th day of lent, Carling Sunday, or Passion Sunday (which sounds much more glamorous) was traditionally a day of mourning for the memory of Christ's passion, the word 'carling' being the old English word for 'mourning'. Church altars would be draped in purple in the memory of Christ's passion, and people would look generally miserable, whether they were feeling happy or not.

As meat was pretty much banished from the menu during Lent, peas were consumed in large amounts in Geordie land to help fill hungry tums after the fast. Usually boiled, formed into cakes and simply fried in lard, I can imagine it would have made for bland eating after a few repeated plates. In some Northumbrian towns, a splash of rum and brown sugar may have been added to try and make things more interesting, but I have to assume that desperation rather than culinary experimentation was setting in at that point.

The traditional pea that was used was the Pigeon Pea, which is actually more a bean than a pea. I can't tell you exactly why these particular 'peas' were used as opposed to typical split green peas as you cannot find them anywhere. I know that they are commonplace in tins in the Americas and Caribbean, but here in the North East - not a bean.

So this is my version of a pea 'cake' served with some simple boiled ham, poached egg and a mustard sauce made with the hock juices. I didn't feel like mourning whilst eating it as it was rather lovely. But I could imagine that back when these kinds of days were an important date in the majority of British diaries, any happiness would have been soon expelled after eating yet another bland old pea cooked in lard, with a splash of rum thrown in for good measure. So drape the house in purple, knock up my modern version of an Old English classic and have a happy Carling Sunday.

1 - Put the peas into a pan, just cover with water and bring to the boil. Boil hard for 5 minutes then reduce the heat and simmer for 30-40 minutes, or until the peas have broken apart completely. Ensure that they do not boil dry and top up when necessary.
2 - Pour the peas into a bowl and allow to steam off and cool completely.
3 - Tip in the anchovies, rosemary, mustard, Worcestershire Sauce and pepper. Put in a handful of breadcrumbs and combine until it starts to come together, becoming more stiff.
4 - With floured hands, form the pea mixture into round cakes about an inch thick. Pour in enough oil into a non-stick pan to cover the bottom and fry off the cakes until golden on each side.
5 - In another pan, heat up a little oil and heat up slithers of ham hock. Remove and keep warm.
6 - To make the sauce, pour in the vinegar and scrape the pan. Then add the other ingredients and cook until slightly thickened.
7 - Serve the ham on top of a pea cake with a drizzle of the mustard sauce. A poached egg would go perfectly with this.
at March 07, 2008

Thank you for this, David, it looks absolutely wonderful. I've been thinking about having a ham-based dinner at Easter and this simple combination might be a winner ... unless you have any other hammy classics or Easter inspirations you'd care to share?!

I love these north-eastern pease pudding recipes you give us periodically ... this one's another beauty

Sorry not to have replied to your email ... I've been having terrible computer problems, all my emails are now wiped, probably lost for good, but now I've got it sorted, although my inbox is a blank canvas, as is my address book. But, yes, when you're ready, just let us know what you think and link back to me

This version would put a smile on anyone's face David. This is an updated version of pease pudding I remember having as a child...actually mom and dad still make "sloppy peas" for their dinner.

Nicola - I'll be putting more Easter treat up in the next week (time permitting!) but why not go for this? It is easy enough to put together and it has a nice story linked to it too!

Joanna - I love me peas! I think we all do up her in Geordieland.

BV - Anything that brings back memories of childhood has to be a good thing, give it a go!

I know how that boiled ham tastes...I have it in a split peas soup.

It's good to see regional English dishes like this one.

Carling Peas rang a bell - so I had a quick look in my Heritage Seed Library 2008 Catalogue under 'Pea - Round Varieties' the first on the list is...
"Carlin ...this ancient round pea dates back to at least Elizabethan times. Protein rich (25%) Carlin is a classic drying pea still traditionally eaten in northern England on the Sunday before Palm Sunday (known as Carlin Sunday). The peas are soaked in brine overnight, boiled and eaten with salt and vinegar or doused in beer or mint sauce. Others say the tradition commemorates the arrival of a shipload of peas in besieged Newcastle in 1644, saving many from starvation"

Sound good don't they, if they are in the 2009 catalogue I may request them to grow next year.

Carlin Peas and poached egg from one of our obliging hens sounds like a perfect Saturday lunch!

!!! sorry about that "the oil" is really me - Magic Cochin. That's what happens when you let your husband use your studio office to organise the local heating oil syndicate emailing before breakfast!!!

Peter - glad you approve, we English do actually have some great dishes!

MC - And here I was thinking, 'The Oil knows her stuff'. And it is you! Thanks for the info. There are urban legends as to why it all came about and yours adds to the list. Interesting stuff!

Celia beat me to it, but I actually have the Carlin pea seeds from a year ago. I'll try to get them in the ground this year and hopefully we'll all be able to see what happens.

This is why I so enjoy your blog, I learn something new with every visit. Thanks for the engaging and informative post.

COS - please send me some!

Susan - high praise from you, I'm chuffed you think so

ooh, this looks lovely. i love the green of the cake against the pink ham. and of course, 2 thumbs up to anything with pork!

Oh thanks for the memories David! I remember as a child growing up in Sunderland (Wearside-but right next door to Geordieland!) my Mam always cooked a pan of carlins which we ate after Sunday school sprinkled with malt vinegar.

There was always a bowl of them which we kids used to scoop a handful & 'ping' the other kids with our peashooters. I can't remember if she cooked a particular dish with them but I'll ask her.

I snipped the following from the internet & the web link below gives quite a bit of information about the various peas used & some personal reminiscences of Carlin Sunday from areas other than Geordieland which you may find interesting.

"not all the Sundays in Lent had their own nicknames. These were Tid, Mid, Misere, Carlin and Palm, with Pace Egg Day being Easter Sunday. Passion or Judica Sunday, the fifth in Lent, is omitted from this list.

The first three names come from the Latin Mass and are based on Te Deum, Mi Deus and Misere mei. Carlin Sunday is the fourth in Lent, sometimes known as Care Sunday or Mothering Sunday when people working away from home returned to be with their families"

"Carlins are small grey peas which are still served in some pubs; cooked in butter with salt and pepper they were supposed to be a form of penance. The name comes from care or carr, meaning penance. In some areas, Carlin Sunday is celebrated on the fifth in Lent, rather than the fourth"

unquote. As kids we were reminded of the 'tid mid' rhyme by both church & parents & we girls had a skipping game where we'd chant the Latin names. Sadly, I doubt many little kids today would have any knowledge of this.

My apologies for the long post. If you choose to include it in the comments, feel free to edit in any way you wish.

What a great twist on peas, ham, and mustard! I love it!

Sorry about that link David, it didn't look like that when I first googled it, I didn't realise it was a blog & now I can't even find it again!

My Mam used to fry the boiled carlins in butter & then sprinkle with S&P & vinegar, & eaten hot with boiled bacon or ham. Dad would also have them with a fry-up breakfast. He always used to say "Carlin Sunday-Windy Monday"

mate that looks fan-bloody-tastic. Awesome - going to be getting some ham hocks next week - you've inspired me.

I love this recipe David we would have something similar when I was a child and I like your version much better!! We'd have boiled ham and mushy peas cooked in the ham water and I haven't had this for years. Thanks for bringing back memories.

I think traditional recipes are great to revive! Well done...

Alison - no, thanks for the link and info, I think it is really interesting. And I liked your dad's poem, ha!

Wil - ham hocks, cheap and such good value considering how delicious they are.

Rose - glad I brought back the memories

I came looking for inspiration as I can't decide what to make for dinner tonight. Obviously I haven't got the ingredients in just by chance, but if I did this would be on my menu. Looks delicious!

I love the idea of the anchovies and rosemary in there, one of my favourite combinations. Ham and peas - classic! That sauce looks unctuous and I want to eat it - with the poached egg!

Alright, I am so making this pea-cake soon! Very soon! :)

This is such interesting info on Carling Cup, you see what it is sad that that magazine had to fold? We are lucky to have you and this blog to fill that void.

Have I mis-calculated? I thought that Passion Sunday (Palm Sunday) was next week - March 16, that's what is says on my calender...

I've added you to the blog roll. I have been terrible at updating it.

Looks really great and making me extremely hungry now. I hope all is well in your part of the world David and thank you for your supportive comments on my blog. look after yourself and keep up the excellent work on your blog

This looks fantastic David and something I've yet to try!

Wonderful take on an old classic, David. I am wild about grainy mustard and wish I could sit down to your dish for dinner tonight!

This is really interesting -I learnt so much from what you wrote.
Thanks for that!
I thought Carling was something to do with beer - shame on me..