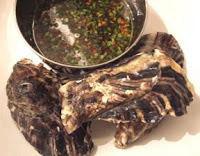 Mother's Day became Madhouse Day for me yesterday. An early rise meant leaving the lovely ladies in my house still snoring as I made a long trip up the Scottish Border town of Kelso to do some food demonstrations for their annual Potato Day.

After a full day of potato based recipes, I found time to have a chat with some of the fantastic suppliers and to sample some of their tasty goods. A certain Steve Oldale of Northumberland Mussels was there, selling his sublime mussels which I swear are the best in the world. Berwick based Steve is the only person licensed to harvest mussels between the Wash and Aberdeen and is currently harvesting almost 4 tonnes per year. Back breaking work and a half. He really is a top man; hard working and extremely proud of his product.

As well as mussels, Steve also had some hand plucked oysters from the same waters which were less than 24 hours old. Absolutely divine specimens which I thought would make for a perfect starter for a deserved meal for my wife who has been a mother now for 3 years. And yes, she is the best. Just ask Cerys.

Oysters are a thing that I could wolf down all day but my wife Helen has always had a bit of a phobia with. That was all put to bed yesterday as each of the fresh and juicy oysters were shucked and consumed with pleasure. To help them along, I knocked up a quick Asian style dressing which complimented the raw beauty of the oyster rather than overtake. And if you can get your hands on some spanking fresh oysters, give it a go.

Combine all of the ingredients in a bowl and drizzle onto your freshly shucked oysters.
at March 03, 2008

I remember having oysters way back when when I was in Newfoundland. A young fellow was selling them by the side of the road. The friends I was with knocked on the door of the nearest house and asked if they could perhaps cook them up for us...that is Newfoundland. They would have benefited with your Asian sauce though:D

foodtube.net Find a Video Recipe, or Add Your Own

We would like to introduce our website, http://www.foodtube.net/ It's similar to youtube except that it's all food videos. You can find video recipes from many countries around the world. You can also add your own video, or star in your own! Thanks for checking out the website. Please spread the word. Have fun!

We bought some mussels from Steve last month at Tynemouth Farmers Market - he was still cleaning the shells having just harvested them a couple of hours earlier.

You're absolutely right - he's passionate about his product and deservedly so - they were delicious.