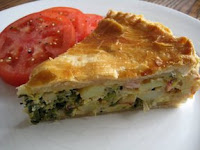 Sometimes in restaurants, there are descriptions for meals that just don't ring true. 'Essence of Crab with a Toasted Seaweed Foam', or 'A Pippin of Grape Granita and Liver Sundae', for example. Well, you get the picture. Sometimes an unnecessary use of French words are packed into a description. It all makes me feel uneasy, as if the chef is trying to hide something. Culinary insecurity I call it.

With two cabbages in my fridge, delivered in the weekly box in a desperate attempt to use up the space left void from a lack of seasonal vegetables, I had to get them used. I've seen recipes for Russian cabbage pies before and often wanted to have a tweak with the recipe in my head. But I have a problem with that description; cabbage pie. It just doesn't sound appetising enough.

When I told my wife and daughter what they were getting for tea, it was met with both shock and disgust. And who could blame them? I had conjured up an image of some overcooked cabbage with its sulphurous sloppiness slithering out of a pie crust. So I began to think of elaborate names that could hide the fact that it was cabbage pie; 'Brassica Surprise', 'Spring Green Greeting in a Crust' and 'Le Chou a Emballé dans la Pâtisserie de Beurre', were a few of the best that came to mind. I was suffering from culinary insecurity.

The resulting pie was far from disgusting. Onion seeds helped bring out the natural sweetness of a fresh spring cabbage. A pinch of chilli and plenty of black pepper gave a welcome heat. I put smoked bacon into mine which, well, added smokiness (vegetarians, leave out the bacon and you will still love it). And it was all bound together in strong Cheddar and eggs within a flaky shortcrust. After one bite, my previously disgusted daughter announced, 'Daddy, this pie is soooooooooooo good!'. And that was enough for any culinary insecurity to rapidly disappear, and for us all to eat the most surprisingly delicious of humble pies.

1 - Re-heat the oven to 180 degrees C, GM4.
2 - Line a pie dish with some of the pastry, leaving enough for a lid. Line with baking paper and fill with baking beans. Blind bake for 15 minutes.
3 - Heat the olive oil in a frying pan and add the potato, onion and bacon. Cook for 10 minutes or so until golden brown. Tip into a bowl and set aside.
4 - Add the cabbage to the pan along with the onion seeds, chilli and seasoning. Pour in a little water and cook for 5 minutes until wilted and the water has evaporated. Tip in with the potato, onion and bacon.
5 - In another bowl, mix together the eggs and cheese. Mix in with the vegetables and bacon then pour into the blind baked pastry case.
6 - Roll out the remaining pastry to fit the pie dish. Dampen the edges with beaten egg then lay the pastry on top. Crimp around the edges with a fork or your thumb then trim off the excess pastry. Push a hole or two into the top with a knife then brush with beaten egg. Bake on the middle shelf for 30-40 minutes until golden brown.
7 - Allow to cool slightly then serve still warm with a simple salad.
at May 15, 2008

My hubby has a penchant for pies, I swear I could serve him anything in a crust. And as we both love cabbage I'm sure we would have no difficulty digesting this.

Good call David. No need to suffer from any insecurities at any time...just call it David Hall of Fame Pie:D

I have not heard of cabbage in a pie but it sounds woderful, what with the streaky beacon!

Oh yes!!!! You cannot beat a good pie! I love it. The idea of using onion seeds with the cabbage is brilliant. I actually have 2 cabbages I need to use from the veg box, they are always the last to be used poor things, you have rally made them the star here though. Of course, loving the bacon too. Cabbage, bacon and cheese. Excellent.

Nothing wrong with a decent sized helping of humble pie once in a while my friend. Though your version sounds a lot more palatable than some. Sounds fab!
...and hope you're having a good weekend with the chocolate lady.

Bacon? Sign me up! If your daughter loved it, then it it must be a winner!

I got two cabbages in my veg box this week too: one green, one red. This could well be the answer to my dilemma as to what to do with them!
I hate the whole foamy/essence/flourish of nonsence too. Why can't such chefs just tell it like it is?!

I enjoy making pies and I do like cabbage and this sounds a great winning combo to me David!