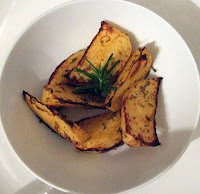 I may have mentioned this before, but much to the surprise of anybody that knows me, I used to be a fussy one. Just like a lot of the children I teach now, most vegetables were a 'no go area' to me. Can you remember ever hiding your cabbage under the mashed potato and pretending that you weren't hungry? That was me.

The one vegetable that was like an arch enemy in my little world of battles with vegetables was the swede. Boiled within an inch of its life and pulverised by school cooks with blunt instruments, the smell wafted into the school dining hall straight into my nostrils and made me gag each time. Mixed with the sulphurous smell of over-boiled cabbage, things got worse.

These days I've grown to love the humble swede, just as I have with all of the vegetables I used to loathe. Mashed with plenty of good butter, perhaps with a touch of nutmeg, I can't work out why I kicked up such a fuss about it when I was young.

But the swede still remains an unfashionable food in this modern world of trendy food fads. So here is a swede makeover that brings it into the 21st Century. Punchy rosemary and a dousing of Parmesan cheese and baked to caramelised glory, it gives you a delicious side vegetable or perhaps a wedge to dip into a sweet chilli sauce or a little sour cream and chives. Hail the humble swede!

I wasn't fussy but I had an aversion to sweet vegetables. I just ploughed on through though and eventually got to like the swede.

Parsnips and (the horror!) sweet potato are definitely not for me though.

This sounds like a fab thing to do with swede - I don't have a problem with it, but the rest of my family does! And actually, I think it would be good with sweet potato or parsnips too, if Lizzie wanted to give that a go ;)

I like swede or turnip or rutabaga whatever you want to call it. I didn't growing up though. Mom used to hide it in with other veggies like squash.

I too have been cooking with swede a lot recently (though we call it turnip up here). Haven't roasted it like this though. Shall most definitely try it out.

I was an odd child in that I always liked everything! Swedes, cabbage, sprouts - nothing changes! I can't think of anything that I don't really like now even - probably just greedy! I love the idea of swede with rosemary though, I must try that combo.

A Swede is like a rutabaga or a turnip? I actually have always loved them, but I did hide liver whenever my mom made it. Blegh.

I love swede, especially mashed with butter but wedges cooked like that sound great - rosemary and parmesan - Mmmm, I can almost taste it.

Like you, I hated swede (rutabaga in the US), when I was growing up. But I now use it a lot in soups and stews and I love it. This recipe sounds totally yumptious.

BTW, hubby and I are kohlrabi converts, thanks to you. Mick grew some this fall and we love it.

I remember you doing swede on mc! Will have to try this, I admit I usually just mash it with carrots...

I love your new take on swede I can just taste the flavours now.

We used to eat it mashed with carrots and butter so it tasted great cooked that way. :-)

This sounds fab David - love it!

Hmmmmm, lovely, another side dish to consider for my Christmas table along with Kevin's Onion Gratin.