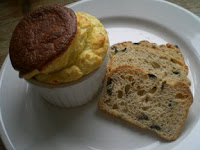 Last year, an ex-work colleague of mine asked me if I liked courgettes. Daft question; of course I do, I will eat anything. The next day, the promised courgettes arrived in style. Two of the biggest marrows I had ever seen in my life were sat in my seat.

And so the story goes that he was looking after his father's allotment whilst he was on holiday and had been watering the courgettes. Coming into the allotment one day, he was met by two incredibly large and overgrown courgettes. It seemed that one day they were courgettes, the next, marrows. And thinking that nobody in their right mind would eat such items, he asked if I wanted them and of course I obliged.

Marrows are much maligned vegetables. Lacking in flavour, fibrous at times and full of seeds and water, they are more than often subjected to a good pickle as they are an unoffensive and cheap filler. I have to admit that with the majority of these monsters I spent half of the night stood over a large pickling pan and subsequently filled a thousand jam jars. I'm still eating the stuff to this day, and mighty fine pickle it is.

But I think that the marrow deserves more respect than that. Okay, it does need the flavour lifted, but as far as I am concerned, once lifted it tastes magnificent. I set off to make something that would not only treat it with great respect, but also take it into another league. A soufflé was on the cards. Not something I make very often, the soufflé and the marrow make a lovely little match. I use good strong Cheddar and English Mustard to embellish the flavour, and the result is a dreamy dish that makes for an impressive starter to any meal.

So start to treat your marrow with a little respect and pack one into these floaty little numbers. No longer should the overgrown courgette be laughed at by children, sat limp and unused in the fridge or looked at in puzzlement and then walked past by adults in supermarkets. Take it to another level and spend a little time making my Marrow and Mustard Soufflés.

1 - Preheat the oven to 180C/Gas 4. Butter 5 or 6 ramekins
2 - Heat the oil the garlic and shallot. Fry for 1 minute then add the marrow. Cook very slowly, try not to colour but it won’t harm until the marrow has collapsed and lost a lot of it’s water. Mix all together so it is one big mush (technical cheffy term) and put aside.
3 - Make a béchamel sauce. In a pan, melt the butter and mix in the flour, stirring all of the time. Then add the milk bit by bit, always stirring until you have a thick béchamel.
5 - Allow to bubble for just 1 minute (this ensures the flour is cooked through) then remove from the heat.
6 - Add the bechamel to the marrow mixture. Then stir in the egg yolks, cheese, mustard powder a good grinding of black pepper. Mix well to gloopy glory.
7 - Whisk the egg whites until you can hold the bowl over your head, then using a large metal spoon, fold 1 spoon’s worth quickly into the mixture. Then gently fold in the remainder. Divide between the ramekins so that they are full to the brim. Tidy up the edges with some kitchen roll.
9 - Bake in the oven for 10-15 minutes. Eat immediately with crusty bread or toast. Beautiful!
at August 01, 2007

Email ThisBlogThis!Share to TwitterShare to FacebookShare to Pinterest
Labels: vegetarian

You know, we never get marrows over here, and I miss them. Souffle has been one of my favorite dishes since I was small, and this pairing with the cheddar & mustard is brilliant. I'll be trying this for sure. Thanks so much!

All right, I give up! What's a marrow. I thought it was that goey stuff inside a lamb shank bone. I am so confused.

BONE marrow is the stuff in a lamb shank. A marrow is an overgrown courgette. Surely you get them is Oz?

No, I had never heard of them before. I asked David and he thought it was some sort of pumpkin. Then I found out they are like a jumbo zuchini (courgette). Thanks for the heads up and no I don't think we get them here.