Mules To The Muffin 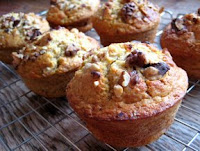 Up until the weekend, I had never made a muffin. I've eaten plenty of them, but for some reason, they have never been tinkered with in my kitchen. I don't mean the good old English muffin, that delicious yeast leavened breakfast bread which is amazing toasted with lots of butter. I mean that big old American import that you find in commercial coffee shops, usually speckled with burst blueberries.

Muffins are almost a healthier option to a cake. I say almost as there is still butter and sugar prevalent, but generally less than a standard cake. They often come with fruit, bran, oats or wholemeal too which ups the healthy stakes. 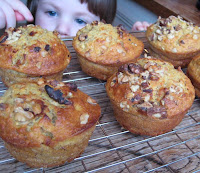 My little sous chef Cerys, getting more and more enthusiastic by the day, encouraged me to make some when I told her I had a few bananas going black. This is a sign to her that we are going to make a cake with them, but I explained the muffin to her and within minutes we were stirring away.

There is nothing to them, they are easier than making a cake, can be experimented with at will and ready in 30 minutes. The only problem is trying to not eat them all as soon as they come out of the oven, they are so good. We added some oats, bran, honey and walnuts and as you can see by one of the pictures, my sous chef appears to trying to steal one before I've even taken the photo. And deservedly so, as we had a hoot getting messy in the kitchen on another wet and windy North East weekend.

1 - Pre-heat the oven to 190 degrees C, GM5.
2 - Sift the flour, baking powder and cinnamon into a bowl. Stir in the oats and bran flakes.
3 - Melt the butter. In another bowl, stir the eggs, butter, honey and milk together. Stir in the banana.
4 - Pour the wet mixture into the flour mixture and beat together with a wooden spoon. Don't worry if it looks lumpy, all will be fine. If the mixture seems a little dry, add a little more milk.
5 - Drop the mixture into greased muffin cases. Sprinkle on a few walnuts. Place onto the middle shelf and bake for 20-30 minutes or until golden brown.
6 - Remove from the oven and allow to cool slightly on a wire rack. Eat whilst still warm, amazing.
at April 03, 2008

Your muffins sound delicious David. To say you haven't made muffins before I would never have known look at your pic, they look perfect!

David, I'm surprised this is your time making muffins. Weren't they easy?

Sometimes I like to get up 1/2 hour early and surprise everyone with the aroma of muffins to wake everyone up.

They look good and likely to be gone in a day.

Can't get enough of banana recipes and blueberry muffins are such a wonderful treat.

Those look great - I can never get mine as fluffy and risen as I would like. Must keep experimenting...

David, I make muffins a lot. Especially healthy muffins, using whole grains, dark fruits, and things like applesauce for sweetners instead of refined sugar. We love banana bread, but it had not occurred to me to put bananas in a muffin. Thaks for the inspiration.

A cracking first muffin-making effort, David! I think you should start making them to order... ;)

Peter - yes, a big surprise to some I know but its is true!

Pixie - I'm really into banana at the moment too and have a few more to post.

Antonia - get a little sous chef alongside you!

Ed - glad you are inspired.

FOS - think I might make my millions if I do?

Your first, and I'm sure not the last, muffins look terrific.
Once you get the feel of the mixture that works you can really experiment. I now use sunflower oil instead of melted butter and try lots of different fruits and flavourings. The best muffins are usually the ones you make in a hurry! Pear & preserved ginger. Raisins soaked in rum & banana. Blackcurrants. Mashed squash and cinnamon...

Okay, I have to admit, my eyes glazed over the rest of the post after I read: ...the good old English muffin, that delicious yeast leavened breakfast bread which is amazing toasted with lots of butter. - I want a recipe for that. Send me please.

muffins are so much fun - chop and change them as you will - this one is a definite classic. I'm working on a white chocolate and cardamom one myself!

Please send me your mailing address so I can send you your prize :)

Have a wonderful weekend, Margot

Banana-honey muffins are true comfort food for me. I only wish I could bake mine with a sous-chef half as adorable as Cerys.

David you are so right. This is one healthy muffin recipe, they look so delicious too what a fantastic healthy treat. :-)

I love any baked goods with banana's and rolled oats. Tasty and they look great!

David I love muffin recipes and I will give yours a try. I too posted a muffin recipe up this past week. Mine has carrots in it. You can also use Courgettes in muffins. They are much easier to make than cakes.

Celia - DEFINATELY not my last! Nice tip with the oils, I am going to experiment.

Cynthia - Of course I will! Watch this space.

Wil - as always, yours sounds superb!

Margot - tremendous! I never win anything.

Susan - she ain't always adorable I can tell you! :o)

Jeena - it is going to be a regular one from now on.

Pat - just checked and yours look superior I have to say!