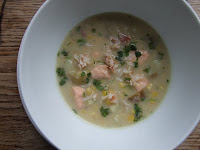 The weather has taken a distinct turn for the worse this past week and after having images of a scorching hot end to May, I'm resigned to the fact that it's typical British weather again.

Far from being the pessimist I actually prefer it when it is a little cooler anyway. Exercise and sleep become easier and I can put my legs away for another year, which is always a plus for family and friends.

Food becomes more sustainable too and I love a good homemade soup or broth. A chowder is more of a complete meal than a soup, a kind children's food for adults if that makes any sense, what with chunks of half processed solids floating in a liquid.

They can take on many forms, using a multitude of vegetables but generally always containing sweetcorn. Smoked fish works particularly well with a chowder, as does shellfish such as clams, mussels and crab.

So if it is feeling a tad nippier where you are in the world, warm yourself with good chowder. It is simple to make, perfect for the whole family and makes you feel a little bit better if you are British and you suspect that sun catching is over for another year...

1 - Heat the oil in a large pan and add the bacon if using, the onion and celery. Cook for 10 minutes until softened and beginning to colour. Stir in the garlic.
2 - Add the potatoes, sweetcorn, bay and stock. Bring to the boil then simmer for 10-15 minutes or until the potatoes are soft.
3 - Take a handheld blender and blend for a short while until you have broken up some of the potatoes to thicken it, or remove half to a blender and do the same before adding back to the pan.
4 - Stir through the salmon and crabmeat and cook for a further 5 minutes. Add the cream or crème fraiche and taste for seasoning. Serve with fresh parsley and some good crusty bread.
at May 20, 2016

Email ThisBlogThis!Share to TwitterShare to FacebookShare to Pinterest
Labels: fish, soups and starters

I love a good soup and stew too, can't wait to get the slow cooker in full swing. :-)

Argh! You said it! You said the weather was turning and now I have to face up to it. Lovely comforting soups are the upside, I guess.

Chowder has to be the best combination of ingredients and so fullfilling David.

So why is putting your legs away a plus? :) Just curious.

A real 'turn of season' dish, this - great choice!

Agreed on the smoked fish, love a chowder and this recipe is right up my street, cheers!

As the rain pelts down outside, your lush chowder makes a lot of sense.

I am so ready for some cooler weather but it aint going to happen here for a bit. :-( This chowder sounds absoluteley scrummilicious. 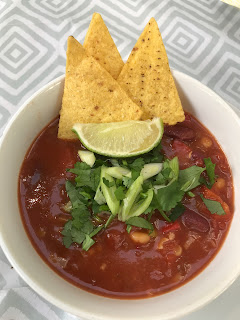