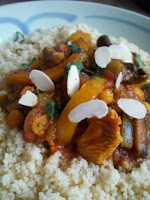 The summer is here after a 2 month disappearance act, and the house is happier than it has ever been. We are looking in the mirror and not being blinded by pasty white northern bodies. Instead, a slightly 'red masking as brown' is glowing back after spending too long doing nothing in the blazing sun. Even so, it makes us all feel fitter and healthier and, dare I say it, slimmer. Happy days while it lasts.

As a man who likes to make the most of a small opportunity, (this opportunity being making the most of a sun that won't hang around for too long), the chilled white wine is making an appearance once kids are in bed, and the garden has become the dining room on an evening. What better way to watch the sun go down over the cranes and industrial chimneys of South Tyneside than with a spicy fruit packed Moroccan style dish.

I love making little Moroccan inspired dishes. That unusual combination of fruit, spice, meat and vegetable makes a dull day brighter. With a few store cupboard essentials that concoct to form this most elegant of North African cuisines, it is possible to transform the most bland ingredients into a thing of beauty. I always call them tagines but of course they aren't. A tagine is the clay pot that that the North Africans use to slow cook their vegetables or meat to achieve melting soft food. I take out the trusty old Pyrex and achieve similar results.

As well as being packed full of flavour, you can experiment with any ingredient that you desire. Another bonus is that tagines are incredibly healthy. Slow braised roots such as the up and coming turnips, swedes, carrots and parsnips soak up the sensual spices to perfection. Mixed pulses and beef are a match made in heaven. A good chunky white fish and fennel are dreamy. I decided to go for peppers, new season plums and chick peas combined with the so-called 'Super Food' that is turkey, a bird I usually reserve only for Christmas. Lets hope the Geordie tan sticks around until then.

1 - In a flameproof casserole dish, heat up the oil then add the onion, peppers and fennel. Cook until slightly coloured and soft.
2 - Add the garlic and spices and cook for 1 minute until fragrant.
3 - Add the turkey and plums and coat in the spices, cooking and stirring for 1 minute.
4 - Add the chickpeas, tomatoes, honey and dried apricots. Bring to the boil and then turn down the heat and simmer for 40-45 minutes until reduced. Keep checking to ensure it is not catching.
5 - Taste for seasoning. Serve with cous cous, flatbreads and a good scattering of toasted sliced almonds, freshly chopped coriander and mint.
at August 30, 2007

Sounds great, but what a list of ingredients! I'll have to do something like that when I'm at my parents house and have access to a lot of stuff.

It is a long list but it is very easy to put together. Most of the ingredients are dry store cupboard ingredients so never a problem!

I am always intrigued how a different combination of spices, make a cusine.

Does this freeze? as we are only a 2 person household.

It certainly will. Only 3 n our family, so I almost always make double in whatever I am making (and depending on how full the freezer is) and stick it in the deep freeze. A good habit to get into.

Sounds delicious. I love Moroccan food! It's not so warm in Surrey I can tell you. I spoke to my mum yesterday (she's not far from you) and she was saying how hot it was. Might just head back on holiday!