Crab and Salmon with Fennel Cream 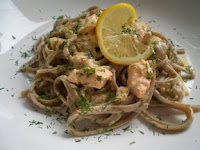 Listening to the legend that is Keith Floyd at the weekend, somebody asked him what his favourite food was. He then proceeded to list off a 3 course meal with complimentary fine wines which had us all drooling. His choice of food, which was turned into the food he would eat if he was faced with a firing squad, was all British. For somebody as intelligent and well travelled as Mr Floyd, it was superb to see good old British tucker getting his number one choice.

This then had my mind turned to what my meals would be if faced with the firing squad. As I love most things, it is an incredibly difficult question to answer. Like my other love, music, my mind changes on what I want to listen to or eat depending on my frame of mind. One day it may be something that takes a few hours of preparing and cooking, the next it may be rarebit on toast. 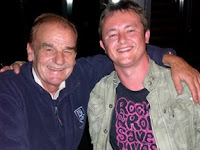 One ingredient that would have to feature in there though is crab. In my opinion, it is far superior in flavour to its expensive cousin, the lobster. Just a plain old crab, boiled and served with bread and butter and a mustard mayonnaise. You cannot get anything more simple yet it tastes truly magnificent and costs very little.

This dish is not British in origin, but it celebrates the sublime flavour of crab within a pasta sauce. Complimented with a little fennel and bulked up with salmon or trout, it takes 5 minutes to make and satisfies crab fans on every level. Making this kind of food strengthens my opinion that the best food is the food that takes the least time. And if faced with the firing squad, you won't have long to gobble it all down. Bang bang. So tell me, what would your final meal be?

1 - Boil a pan of water and cook your pasta of choice, I used tagliatelle. Whilst the pasta is cooking you can start and finish your sauce.
2 - Heat the olive oil in a non-stick pan. Add the fennel and cook for 1 minute until softened but not coloured. Add the white wine and reduce by half.
3 - Add the creme fraiche and bring to the boil. Then quickly turn down the heat so it just bubbles, you need to make sure it does not split. Add the crab and salmon and stir thoroughly. Cook for 1 minute. Add a squeeze of lemon and a good handful of freshly chopped dill. Taste for seasoning.
4 - Stir in the pasta and serve with optional Parmesan cheese.
at September 04, 2007

Wow, it looks delicious.
Haven't visited your blog in a a while because my Technorati is not showing me that you have new post for some reason....?

Thanks. I've no idea what Technorato is by the way so I can't help.

This dish sounds wonderful David. A great recipe for our British Columbia salmon!!!!

I agree with you David, crab anyday over lobster and I love the way you've paired it with salmon - what's not to love.

Hi David,
That's a wonderful dish I would order at a restaurant. I love crab, too. But because I don't particularly enjoy having to poke around to get the flesh out, I don't cook it much at home. I've eaten these huge Sri Lankan crabs in Singapore. That's my kind of crab - so much flesh which was easy to remove and devour. ;-)