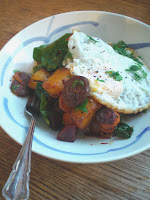 If you are anything like me, you will understand what it is like to suffer from the mid-morning munchies. Despite eating a healthy breakfast each morning, come 10am, my stomach starts to sting and I feel the urge to eat anything in sight. When I was office based, that usually meant a large cup of tea and several dunked biscuits. Nowadays, with food surrounding me most of the time, I can afford to be a little more adventurous.

A great weekend treat is a hash. A hash, because it can consist of anything that will combine in one big pan to make for a delicious irresistible meal. It is a meal you can eat at any time of the day as it can't make up its mind whether it is a breakfast, lunch or dinner. If you skip breakfast and eat one of these at 10am, you will be full for the rest of the day. Although I can't make any promises.

This hash uses chorizo. My chorizo comes from a local supplier based in Northumberland, and the sausage is less salty and produces less oil than some of the commercial Spanish sausage I have used. And now that root season is upon us, you can experiment with your roots and make up a fantastic colourful hash. Stick a fried egg on the top and release the tomato ketchup from the grasp of your little ones; it is the one time I will forgive anybody for having a squirt of the dreaded red stuff.

1 - Place the beetroot in one pan and the carrot and potato in another (so that the colours don't run). Cover with water, bring to the boil and simmer for 10 minutes or so. Drain, cool and set aside.
2 - In a large frying pan or wok, heat up the oil and then add the onion and chorizo. Quickly stir fry until golden and some oil has been released. Remove with a slotted spoon and set aside.
3 - Add the drained root vegetables and cook until golden and as crisp as you can get them. Return the onion and chorizo along with the paprika, chilli and tomato purée and combine thoroughly. Taste for seasoning.
4 - Finally, add the spinach and toss briefly until wilted. Serve in bowls with an optional fried egg on the top, optional squirt of the red stuff and crusty bread.
at October 04, 2007

I have always meant to try hash, just never have. You have inspired me. I think the kids will like it to :)

At the moment I am on a 'lose a stone' diet, self-imposed as I'm getting married next year and want to be a little less 'cuddly'. One of the hardest things I've had to do is cancel my mid-morning snack and it's hit me hard! I will definitely be trying your hash as a weekend brunch.

I know I'd enjoy this daily if someone made it for me. I'm not a breakfast person and it's one of the meals I rarely eat if prepared by me.

Your hash looks perfect. Kids like a hash style meal....

Corned beef hash is a favourite of mine. This sounds much classier! Will have to give it a try.

My MIL does one with the delicate first frost tips of kale..steamed, some boiled spuds. and then fries up a mass of 'metwurst' (she is in germany and I am in Australia so I use Chorizo) and onions.. mix the whole lot together == lots of pepper and salt == a little nutmeg fresh ground - and top with a fried egg.... scares me to think how good it is!

43M5PQ Your blog is great. Articles is interesting!

B1i5gA Please write anything else!

actually, that's brilliant. Thank you. I'm going to pass that on to a couple of people.

Please write anything else!

actually, that's brilliant. Thank you. I'm going to pass that on to a couple of people.