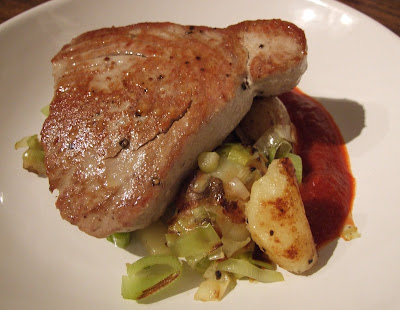 1 - To make the sauce, hold the peppers over your hob flame with a pair of tongs and turn until completely black. Put into a plastic food bag, seal and leave to cool. If you do not have gas, rub the peppers with olive oil and bake in a hot oven until black.
2 - Remove the peppers from the bag, peel and de-seed. Place all of the ingredients into a blender and blitz to a fine purée.
3 - Push through a sieve into a pan and then reduce until thickened. Taste for seasoning. Reserve what you are using for the meal and put the rest into an ice-cube tray.
4 - Heat the butter and oil in a large frying pan. Add the leeks and cook gently until softened and slightly coloured. Remove.
5 - Add the potatoes and cook until crisp and golden. Add the leeks and taste for seasoning.
6 - Season the tuna pieces. Heat a little oil in a frying pan and add the tuna. Cook to your liking.
7 - Serve on top of a bed of potato and leeks with some of the sauce on the side.
at November 22, 2007

That pepper sauce does sound good!

I made the sauce this weekend and served it with steamed cauliflower and lemon sole. Husband who needs to be persuaded to eat fish approved! Looking forward to using frozen sauce. My ice 'cubes' are actually crosses (courtesy of an ikea tray) which makes the blood red sauce look rather macabre!