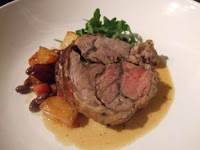 Have you ever decided that no matter how good a particular combination of food is, the very thought of it sounds ridiculous and you aren't going to touch it? Some of the things that Heston Blumethal does do sound unbelievable, almost ridiculous. Given a few hundred quid I would happily eat there and probably adore it, but that laboratory style cuisine is not my preference of food. But I do like to combine tried and tested 'ridiculous' combinations that don't take all day to prepare.

One combination is the magnificent pairing of anchovies with lamb. If you can't stand the thought of an anchovy, or even if you just hate fish, I beg you to reconsider as for some reason a good salty preserved anchovy seasons the rich fatty meat of a lamb to perfection. It doesn't taste fishy and if anything, it enriches and enhances the meat. Roughly chop a few with some rosemary and olive oil and run it into the pierced flesh of a lamb leg for your Sunday roast and you will see what I mean.

Last week I played around with a recipe from HFW's Meat Book in which Hugh stuffs a shoulder of lamb with anchovies and capers. It is sensational, but there to be experimented with. I guessed that it would benefit from a little texture and crunch of a nut, so some walnuts were added. Rosemary was a certainty, as was a good dollop of hot English mustard and a little cider vinegar. If you can handle massaging this into a whole shoulder of meat before doing a few simple butcher's knots and tying it all together, you will benefit from a superior cut of meat with fantastic flavour combinations. A glass of white wine or cider poured onto the meat halfway through cooking ensures an amazing gravy, and keep a bit spare for a 'posh' sandwich the next day.

Shoulder of Lamb Stuffed with Anchovies, Rosemary and Walnuts

For the gravy
1 glass of cider or white wine

1 - Pre-heat the oven to GM7, 220 degrees C.
2 - On a chopping board, roughly chop the anchovies, walnuts and rosemary then add to a bowl. Add the mustard and vinegar and a little olive oil until you have a good thick 'paste'. Season with salt and pepper.
3 - Lay out the shoulder and massage into the flesh. Roll and tie with string then season the skin.
4 - Heat up some oil in a baking tray on the hob and quickly brown the fat all over. Place into the oven for 20 minutes then turn down the heat to GM4, 180 degrees C. Cook for 10 minutes per 500g for rare, 15 minutes per 500g for medium, 20 minutes per 500g well done.
5 - Pour on the cider or wine with a little water halfway through cooking to make a gravy.
6 - Take out and allow it to rest for 20 minutes. Carve into thick slices and serve with seasonal roast root vegetables and borlotti beans.
at November 12, 2007

David I LOVE that combination, and this looks like a good version, one to try. I'm a bit suspicious of the Heston B laboratory school of cooking, but he has a pub as well as the restaurant, and there, the food is sensational but not over-the-top and into the realms of food critic madness ... we went there last year for my husband's office party - and, guess what? We're going again at the end of the month ... who's a lucky girl?? Watch this space ;)

I love putting anchovies with red meat. It salts everything beautifully and makes good gravy, especially as you say with a glass of wine thrown in. Your combination sounds great.

David, thanks for this recipe and tip. Amanda too! I've never thought of putting anchovies with red meat and with lamb?! Can't wait to try this.

I couldn't eat at the Fat Duck every night but the culinary theatre is awe inspiring - I would recommend it. I was worried that everyone has harped on about about snail porridge and the egg & bacon ice cream, but they do really work, honest!
Enjoyed seeing you on Cooking the Books tonight, sorry we weren't on the same one, I would have loved to have met you properly. I did my bit about my truffled potato & porcini soup, and they've asked me back again to do another recipe next week. Maybe see you there!

I must roast off some lamb soon- your recipe looks fantastic!

Such a great combination! I did a butterflied leg of lamb for the barbecue over the summer and stuffed slits in the meat with a paste of anchovies, parma ham, garlic and flatleaf parsley. It was superb. I love the idea of adding some crunch in the form of nuts - I must give this a try. Thanks for the idea.