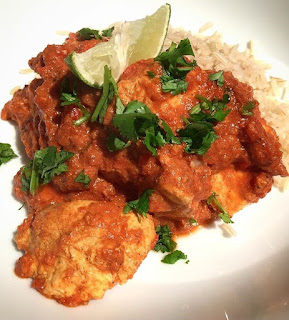 A very unauthentic curry that apparently was invented on these shores to suit the British palate, Chicken Tikka Masala has fast become the most popular takeaway in the UK.

My family tend to keep away from takeaways and make our own. They really can be simple to make and in this case, are often more healthy as you are in control of the salt and fat content.

Rather than cream, this uses yoghurt but aside from that, it is absolutely packed with flavour and misses none of the extra fat. For the spices you can use one of those ready-mixed tikka spices but it's just as easy to do it from scratch. Give your taste buds and your stomach a favour and try it now!

1 - In a large bowl, mix together the yoghurt, lime juice, spices and seasoning then marinade the chicken in it for a few hours.
2 - Finely chop the onion, garlic, chilli and ginger (or blitz in a food processor). Heat up the oil in pan and add. Cook for 10 minutes until starting to colour. Add the spices and cook for 1 minute.
3 - Stir in the tomato puree followed by the yoghurt. Simmer for 10-15 minutes until slightly reduced. If it looks too dry, add a splash of water. Taste for seasoning.
4 - While that is cooking, place your marinaded chicken on a piece of tin foil and cook under a hot grill until cooked and slightly charred.
5 - Stir into the curry sauce and taste for seasoning. Serve with rice, a scattering of fresh coriander and wedges of lime.