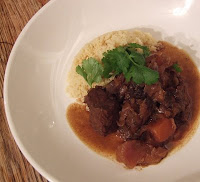 Slow cooked meat and root vegetables with gentle warm spices, just a touch of sweetness from the fruit and honey to take the edge off any potential heat and it can only be the unmistakable Moroccan style stews that satisfy me every time.

The North Africans knew what they were doing when they took a clay pot with raised sides and called it a tagine, enabling them to create moist and tender stews from basic ingredients. I use a domestic casserole pot for my slow braising, and the addition of a few familiar spices and a little honey and fruit are all that are needed to transform an equally beautiful British stew into one that smells and tastes all mysterious and exotic.

Lots of people I speak to received an electric slow cooker off Santa Claus, meaning that they can easily achieve this most delectable of stews to serve with a little cous cous to soak up the juices. And it is a winner for the children too; even the fussiest of children can't help but have their taste buds given a wake up call when sampling something so delicious. Even my current favourite vegetable, the much misunderstood swede, turns into a 'melt in your mouth' treat. Any doubters out there, all I ask of you is to give it a go.

1 - Preheat the oven to 160C/Fan 140C/GM4.
2 - In a large casserole pot, heat the olive oil and add the onions and garlic. Slowly cook for 10 minutes until beginning to colour.
3 - Add the spices, remaining vegetables and beef.Cook through for 5 minutes, stirring until the beef is browned, and then pour over enough beef stock to just about cover it. Stir through the coriander, honey and lemon rind. Bring to the boil then cover and place in the oven for 2 hours.
4 - Taste for seasoning. Serve with cous cous and fresh coriander.
at January 06, 2009

Mmmm - just ideal for this time of year. I'm finally coming round to Moroccan food (the combination of meat and dried fruit used to be one I really disliked) and should really start to experiment more. I've not tried one with prunes before so this combination should be next on the list - bet it is wonderful.

Tagine just brings visions of palm trees swaying in a warm tropical breezes and all the spicy scents of Morocco.

Looks and reads deliciously David! All the Best for 2009 to you and your family! Please keep sharing your mouth-watering dishes and wonderful food commentaries!

Reading this has made me realise how strange it is that when I was still living in Hackney I posted about Atlas Mountain Soup, but now I'm living in a country which is just 8 miles from Morocco at the nearest point I've not even eaten Moroccan food, never mind post about it. Weird! I shall have to remedy that.

Another cracker matey, keep up the good work.

I was one of those lucky slow cooker recipients! Santa's just so fab, isn't he...

I like the sound of this - I'm a sucker for fruit with meat (no, I'm not some kind of bat). Haven't come across pears in a stew before, though. Intriguing!

Sounds great, I do love a good tagine. I got a slow cooker last year and it's still sat in the box it came in - I'm a shocker for buying kitchen kit and not using it. x

Ok I will try it out -
But I am worried - Santa DID NOT give me a slow cooker.
Am I on the naughty list?

I have only ever eaten Moroccan food in Morocco, never thought to make any myself. I will have to give this a whirl, it sounds delish.

Looks like a seriously good stew but the prune thing is an issue for me as for some reason I have a problem with them. Who knows why!See now I am in the mood for some serious comfort stewing!

Very nice, especially for the winter. Another one to try out!

mmmm. this is the perfect time of year for this dish. it's time to make this!