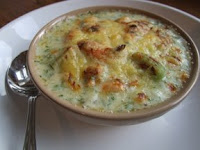 As busy and fascinating as 2008 has been already, it has also been tinged with disappointment. For last week I received some news I wasn't expecting; the magazine I write for, Tastes Of Britain, is folding. Only 4 months old, the magazine has been incredibly well received amongst the more established magazines, praised for its theme of championing British local and seasonal food.

Unfortunately, it appears that due to lots of complicated reasons, it will be no more. So my fledgling writing career for glossy mags comes to an abrupt halt along with a few others. The only good thing I can take out of this is the backload of writing and recipes I already have for them that sadly cannot be used now. So I will reach into the archives and print them up here.

As leeks are the vegetable to sing about in these days of damp darkness, and as they are one of my favourites, I've devised a nice fishy number. Mussels and leeks go remarkably well together; earthy deep orange fresh Northumbrian shellfish accompanied by sweet mild onion leeks, in a kind of gratin, make for a lovely winter warmer to be eaten with good bread and butter. It almost banished the blues after hearing this sad news. And all I can end on is this - it was fun while it lasted. RIP Tastes Of Britain.

1 – Wash the mussels and pull off any beards. Tap them sharply onto a work surface and throw away any that do not close up.
2 – Heat up the oil in a deep pan and add the mussels, shallots and cider. Put on the lid and cook for 2-3 minutes, shaking the pan every now and again, until the mussels have fully opened. Remove the mussels with a slotted spoon and keep aside, throwing away any that have not opened. When cool, remove the mussel flesh from the shells. Strain the cooking liquid through a sieve and keep aside.
3 – Trim and slice the leeks into 1 inch chunks. Place in a steamer for 5 minutes until soft. Remove and keep aside.
4 – Make a roux by melting the butter in a pan then stirring in the flour until well combined. Cook, stirring, for 1 minute. Gradually add the milk, stirring, until you have a thick white sauce.
5 – Stir in 100g of the grated cheese along with the mussels, leeks, dill, reserved cooking liquid and a good grinding of black pepper. Taste the sauce for seasoning.
6 – Pour the mixture into individual gratin dishes or a large gratin dish, top with a little more cheese then cook under a hot grill until golden and bubbling.
at February 07, 2008

A true shame, David. Sorry to hear about that. I bought the first issue and thoroughly enjoyed it. Would have continued buying it but couldn't find it in my regular shops.
Expect to see you popping up in Delicious or Good Food soon!

Oh how sad David . I enjoyed the magazine . Perhaps someone else will snap you up ? Susan

Sorry to hear your news - very bad luck for you and everyone concerned.

Great recipe, though. My sadness is that yesterday, while eating fish pie, my husband asked if it was possible to have one without mussels next time. So I won't be making this for him. On the other hand, when my elder son gets back from uni - this will be perfect

There will be lots of other opportunities for you, I know it.

So sorry your first venture into the fickle world of publishing has come to sudden halt. You'll find a new project soon, the financing of these mags is a murky world it's best not to get involved in, just pick up your spatula and get cooking up something new.

I've a postcard I bought from a lovely group of creative ladies in Harare, Zimbabwe, it says "Don't agonise - organise!" Reading it gives me the kick up the but needed when a project falls through.

All the best
Celia

Sorry about the magazine David :(
I'm sure we haven't heard the last of you though with all your creativity and "steadfast British bloke" appeal...onward and forward :)The mussels sound devine by the way!!

Sorry to hear that David, I too enjoyed the mag. I am sure something else will come along as you are a very talented chef. And I for one will enjoy your backlog of recipes. Big hugs!!!

Oh David this is sad news! I really enjoyed reading this magazine! I am quite sure your witting talents will soon be called for in another venture.

you'll have something else in no time matey, you've got a real talent.

Such a shame about the magazine! Sorry to hear your news.

This sounds like the perfect recipe for my leek lurking in the fridge and thank you so much for help with the paella dish!

There'll be summink along before you know it bro, you always come up smelling of roses XX

Well, I feel a bit embarrassed as I didn't put this on for any sympathy. So thank you all for your kind words! It is lovely to know that there is support out there. Of course there were lots of good writers with TOB so it is a shame for more than me and I'm gutted for them.

Thanks again, really lovely words of support, it does mean a lot.

David that is truly a shame. Why in the time when we need to be recording our own food... Anyway, hon, use the blog to educate and inform us. Really bummed to hear that.

I'm truly sorry to hear about the magazine, David. But don't despair. I'm sure those backlogged articles of yours will end up in another glossy mag. I'm sure of it.

I'm sorry to hear that, David. I bought my first copy last night as it happens and was drooling over your northumbrian leek pudding! This looks superb too though sadly, I am allergic to shellfish. Perhaps I will do something similar with smoked haddock and leeks.