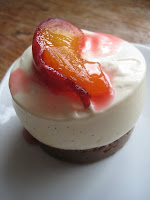 Lets face it, the seasons just aren't the seasons any more. After the wettest August for some years, September has continued in a similar vain. As I look out of my window at another overcast sky, it is easy to get down about the whole thing. But after the week from hell that I had last week, it is time to take positives from everything. Yes, even another grey day.

Autumn in just about upon us, and as a food obsessive, that is about as positive as it gets when it comes to great produce. I'm already saving every jar available ready for an evening or two of preserving. My demijohns are washed and sterilised in preparation for a litre or five of homemade sloe gin and sticky plum vodka. I've even put a goose on order and invited guests for Christmas Day.

A walk around a decent bit of countryside at this time of the year should indicate free food of all forms amongst the hedgerows and trees. One of my favourite is the wild plum, and in my area I've found a lovely patch of damsons. Small and oval shaped, deep purple with a powdery sheen to their skin, it is a truly great find. Slightly sweeter than a commercial plum, they can be plucked and devoured on the spot. And that can be a problem when your helper is a certain 3 year old plum lover.

I like to soften a few damsons in honey and vanilla which can then be used as a very loose jam for your toast, a great topping for yoghurt and muesli or just as it is with a little double cream for a simple dessert. If you are feeling adventurous, they also make for a nice topping on my quick and easy cheesecakes. So keep your eyes peeled and a plastic bag handy ready for them damson moments. I'm feeling positive already.

1 – Line 4 individual ramekins with clingfilm.
2 – Grind the ginger biscuits down in a food processor. Melt the butter in a pan, add the biscuits and combine. Press the biscuit mixture into the ramekin dishes and place into the fridge.
3 – Half, stone then quarter the damsons or plums. Place into a pan with the honey and bring to the boil. Simmer for 10 minutes until soft then remove from the heat and cool.
4 – Beat the cream cheese, icing sugar and lemon juice together in a bowl. Whip the cream to soft peaks in another bowl, scrape in the vanilla seeds then fold into the cream cheese mixture.
5 – Press the mixture into the ramekins, smooth off then place back into the fridge for an hour or so.
6 – Remove from the ramekins and clingfilm, place onto serving plates and top with the softened damsons.
at September 15, 2008

David, our summer and now Sept. have been the shits!

Cheesecake sounds 'bout right to settle me down.

Love damsons! Went to pick somne this weekend but unfortunately it has not been a good year down south. Great blog.

Lovely. Will most definitely be trying this out as my plum tree has been particularly productive this year.

Pity about the rubbish summer weather. We've had a pretty decent one up here really so I'm not so annoyed about the onset of colder weather.

I always make no-bake cheesecake, it's so easy. Your cheesecake sounds yummy, I love damsons.

Lovely post, David, you sound so organized for Christmas already! I admit, I've been thinking about it too, but don't tell anyone!
How about these quick cheesecakes!A recipe to try, for sure, but then all of your recipes are.

I'm not sure that we could find wild plums in our area, or damsons, but there are all kinds of plums this time of year at the fruit markets and roadside stands:D

Damsons are my favourite plums. I think that's probably because they make the best German Plum Cake, but I have to say your cheese cakes look pretty tasty, too and a lot more elegant! I like the sound of sloe gin, but it looks like round here it's not been a good year for sloe berries.

Sloe gin and sticky plum vodka doesn't get any better when homemade! A wonderful cheesecake of plums & just perfect as they are plenty at the moment :)

Oh my goodness...the lemon with the cream cheese, honey and plums sounds like an amazing combination. Wow.

You should check out the URL www.behindtheburner.com...it's an upcoming foodie website that's going to give tips, tricks, and fun information on all things culinary.

What a brilliant idea!

Ginger biscuits are so often overlooked!

I cannot believe you have invited guests for Christmas already! You are making me panic.

goose ordered? You are organised!

Maybe I should take a walk on the South Downs to see what I can find before Autumn progresses on much further...

oh, damsons! What a treat! And how lovely of your 3-year old plum lover you help you devour them...I know what you mean about the seasons, the past two years have been iffy but I maintain a ridiculous optimism every year that, 'next year will be really hot!' It's not very likely is it..

You really have to try sloe vodka, it's the bomb....

Living in San Diego, we don't really have seasons. But I still love seasonal eating.

The seasons really aren't the seasons, are they? I've just been watching kids picking fallen conkers... I could have sworn that in 'my day', they didn't start falling until October or even November. But thanks for the reminder about damsons - I must keep an eye out...

Hey, nice site, this cheesecake looks great. Im going to try it out on the family.
www.strictlyfinedining.blogspot.com

I think all around the summer has been extreme. Here in the Caribbean it was way too hot.

David, summer was the rainiest on record for the past 50 years here as well, but September has been quite nice. Glad to hear you're over your horrible week... The foraging for wild fruits and other countryside edibles is something I can totally relate to... love it! Your cheesecake looks delightful. Thanks for sharing. :)