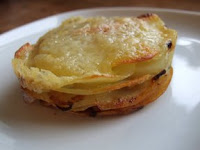 As a child, staple food in our Geordie household consisted of anything potato based. So it could have been mashed potato with cabbage and bacon, chips, bubble and squeak or just boiled potatoes with gravy. I think I grew up thinking that potato had to be eaten with each meal or I would come down with some horrible illness. There could be no other reason for it featuring on my tea time plate each day.

One potato based dish that was always my favourite, and served to me at least once a week, was a pan haggerty, or panackelty depending on which side of the Tyne you were born. A traditional Northumbrian dish, pan haggerty is basically thinly sliced potato and onion, layered in a frying pan and cooked on a low heat. I've no idea if it derives from the French and their various 'thinly sliced potato' dishes or not. The word 'haggerty' is said to derive from the French word for slice, 'hachis', so possibly it does. But I prefer to think romantically that it is a Geordie born dish derived from cheap and plentiful filling ingredients. Either way, it is absolutely delicious.

Techniques for cooking a pan haggerty vary all over the North East, making it one of those classic dishes which can create a heated debate amongst housewives, often leading to violence. For example, when I made this dish on MasterChef Goes Large last year, my mam rang me immediately after watching it not to congratulate me on reaching the semi-finals, but to berate me for making it incorrectly. 'It should have corned beef in it and cooked in a little water for hours on end!', she explained. I couldn't argue as this was the very food I ate every week when I lived at home. And I didn't want a clip around the ear.

My version is, well, my version. No frills, very easy to make and absolutely moreish. Crunchy and golden on the bottom, soft and gooey in the middle, cheesy and bubbling on the top. It can be made as little individual pan haggertys like in the recipe below, or it can be made in a large ovenproof frying pan. Just increase the quantities. It will keep for a couple of days in the fridge and is amazing cold or reheated and a brilliant accompaniment to roasts or as a variation on roast potatoes for your Sunday lunch. Pan haggerty or panackelty. Who cares, as long as it is delicious. Just don't argue with your mam about it...

1 - Pre-heat the oven to 200 degrees C, GM6.
2 - In an ovenproof frying pan, heat up the vegetable oil and cook the onion for 5 minutes until softened and beginning to caramelise. Remove and set aside on kitchen towel.
3 - Wipe the pan clean, place back onto the heat then add your fat of choice. Place a chef's ring into the pan and add a layer of potatoes, making a neat ring. Add some of the cooked onions then salt and pepper. Continue in this fashion until you have filled the chef's ring.
4 - Spoon over some of the melted fat. Cover with foil then place on a high shelf in the oven. Cook for 25-30 minutes. Remove the foil. Test the potato with a sharp knife, it should glide in easily.
5 - Put the grill on high. Sprinkle a little grated cheese onto the potato then place under the grill until golden and bubbly. Run a knife around the edge then plate. These will keep in the fridge for 2 days.
at January 04, 2008

Email ThisBlogThis!Share to TwitterShare to FacebookShare to Pinterest
Labels: vegetarian

Have bookmarked this for later in the year. At moment I'm going to have to focus on removing the multiple croissants from my waist meaning goosefat is a no-no! ;)

Lovely ... your mam may not like your version, but the rest of us do! Just one thing, if you make it ahead and put it in the fridge, how would you reheat it? Half an hour in a moderate oven? Or ...

Wendy, I know what you mean but a little fat won't harm. I'm taking to the streets with my Ipod and it is doing the trick!

Joanna, glad you like it. Best way to reheat it is to wrap it in foil and reheat for 20 minutes in a moderate oven. Or blast it in a microwave if you prefer!

I love reading your blog and being reminded of all the fab food I used to eat as a very small child growing up in the beautiful North East. I can imagine arguments breaking out among Geordie lasses (especially my relatives) on how this should be made. Made me giggle about your Mam calling you to tick you off.

It's funny how different families have different culinary traditions. In my house it was all different types of pasta and potatoes were only baked--plain or with butter. Not terribly exciting, hey? Your pan haggerty sounds like ideal comfort food--carby, hot, cheesy, and gooey. Thanks for sharing.

My first time here David - coming from Joanna's. Since potatoes are my thing, this looks excellent to me. Love the exchange with you mum!

I certainly like you use of goose fat, David

A brand new way to cook potatoes for me. We will have to write a cookbook "1001 Ways with Potatoes"...sounds delicious by the way!!!It puts a smile on my face to imagine all the traditional cooks in heated discussion on how a haggerty is made.

I'm never disappointed when I read your blog David and another delicious recipe!! My mam always served potatoes with each meal too in some form! I think it was to help fill us growing kids up. Potatoes still remain one of my favourite veggies now.

Amanda, thanks for your words. And yes, arguments still break up all over! Geordies will argue about anything.

Susan, traditions are a dying thing and i want to keep them alive, especially food traditions.

MKIHC, welcome over! Glad you liked the exchange with my mam, one of many I can tell you!

Ed, I need to be careful with that goose fat for obvious reasons. The hips!

BV, the cook book sounds like a good idea, lets do it!

Rosie, thanks. If my recipes are half as good as your puds I'm doing okay.

Hi there you have such a lovely blog. Great recipe it really does look so delicious. I have a blog also here is my link Food Recipes

Let me know if you would like to exchange links. Thanks Jeena x

I loved the look of this when you made it on Masterchef. Awesome now I have the recipe. I will let you know how they go.

David, I love the way you feel about keeping the cooking traditions of the north-eat alive. When I first saw you make the famous leek pudden' on TV I knew you were a man after my own heart.

I lived south of the Tyne & my Mam always called it panacklety & of course so do I. Most times it was corned beef but she often made it with scraps of stewing steak. I've even had it with rabbit & black pudding & also pigeon as my Dad used to shoot. My love of the glorious potato will last forever.

Thanks for stopping by, and glad that you like the keeping these traditions alive too! We have so much to sing about as far as I'm concerned and more than happy to burn that torch.

I ive in East Bodon, from Sout Shields, where are you from?

I had an idea you were near to East Boldon. Last summer I was visiting my Mam S/Land & while we were in Whitburn at Latimers we called into "Roots & Shoots" & I asked if this was the shop you used. The lady mentioned you lived locally & was delighted I knew about you & their shop, we had a great chat about Masterchef & they were 'SO' proud of you!

My wife first made me this a few years back (we're both from Saltburn/Redcar area) but she adds smoked sausage slices. Had it again for the first time in ages last night and demolished it!

A wonderful winter warmer of a dish that just makes you feel good, no matter how bad a day you've had. :)

This is so fabulous. I'm in NZ and they just broadcast masterchef. I saw your panhaggerty and said to myself ... I must find a recipe for that. Did a search and what do you know.
Cheers!

This is so fabulous. I'm in NZ and they just broadcast masterchef. I saw your panhaggerty and said to myself ... I must find a recipe for that. Did a search and what do you know.
Cheers!

Thanks for getting in touch. Don't know if you can get Olive over there but I'm doing a feature on North East food next mont with the pan haggerty featured.