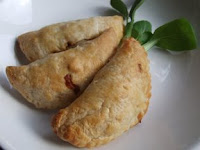 The crab meat has been slightly devilled with marvellous English mustard and Worcester Sauce, and it pairs quite magnificently with small cubes of sweet swede and luscious leeks. They fill the house with mouth watering aromas and it is difficult not eating the whole tray when they have been removed from the oven.

1 – Pre-heat the oven to 200C, GM6.
2 – In a non-stick pan, heat up the oil and butter then add the leeks. Cook gently for 5 minutes until softened but not coloured.
3 – Add the cubed swede and heat through for a further minute.
4 – Stir in the crab meat, vinegar, cayenne pepper, Worcester sauce and English mustard along with a good grinding of black pepper and a pinch of salt. Taste for seasoning.
5 – On a floured surface, roll out the puff pastry. Cut out discs approximately 5 inches in diameter. Place tablespoons of the crab mixture into the centre of the pastry.
6 – Dampen the edges of the pastry with milk then fold over and press the edges together. Crimp with a fork.
7 – Brush with milk then bake on a high shelf for 20-25 minutes until golden brown. Delicious hot or cold.
at January 07, 2008

That's so cool that your recipes are published regularly! It is terrific because they are so good they really need to be shared as widely as possible! hese sound pretty great--I'm a sucker for crab/leek combos.

Sounds delicious I love the taste of leeks in all kinds of dishes I bet it tasted great in this pasty! The picture looks delicious. :-)

Well done - was so proud reading your article! Hurrah for being published!

Oh if only I had not develpoed an allergy to shellfish . Sounds great . Susan

I love crab too! The pastry looks yummy... Thanks for sharing the recipe. :-)

We really love crab. Don't know why but it's hard to get decent crab where we live. At least that's what I've found.

Hi David,I am SO pleased for you for getting your article published in what sounds like a stunning foodie magazine - well done!!! I must try and get this magazine too...

I love the idea of pairing crab with "swedes" or what we call rutabaga. But your crab culture is a little different from ours, I think. We focus on the Chesapeake Bay blue crab, which is seasonal, early summer into fall, and has been on a terrible decline because of the pollution in the Bay. Another good reason for humans to pay more attention.

Over the top from the conventional Cornish Pastie with meat and potatoes David...although I do love that as well!!Three Cheers for David on being published in Taste of Britain...hip..hip...

Lovely sounding recipe David, congratulations on being published. I'll be looking out for the Tastes of Britain.

Just a couple of points I hope you can help with. The ingredients ask for ready-rolled pastry, but in the method you say "roll out the pastry" does that mean you roll it out again, thinner than the way it comes out of the packet?

Also, as it's only a 5" pastry circle, I take that to be a perfect size for a 'two bites big' buffet morsel, so it would be helpful to know how many pasties can be made from these quantities.

Once my freezer is cleared from all the emergency Christmas purchases, I plan to head up to Sunderland quayside for my usual half a dozen live crab which I'll boil, dress & freeze in usable amounts. As it's 2/3 months since I last bought them, I'm just wondering what the quality of crabs is like at the moment.

The pastry that comes ready-rolled in packs tends to be too thick for a pasty, ie. one bite and it is all pastry! So just rol it out a little thinner than what it is, the pack will usually specify this anyway.

As for the size - it is entirely up to you. My little pasties are just that, little. It is all there to be experimented with. Mine make approximately a dozen. Hope that you enjoy!

Crabs are all good at this time of the year. Check out my article in Tastes Of Britain if you can, but the brown crab is available in huge quantities at the moment, I get mine from Latimers. Superb shop.

Thankyou for the clarification David, I haven't bought puff pastry for quite some time, so wasn't sure. It's helpful to know as I've been asked to provide a plate of appetisers for a shared buffet next month, I'm confident these will be very much appreciated.

I do buy fish, shellfish & deli items from Robbie Latimers when I visit S/Land, but I also have a long-standing contact at the quay who very generously discounts me if I multi-buy crabs. I'm well aware of the hard life of the fishermen, so I think it's fair to spread the cash around.